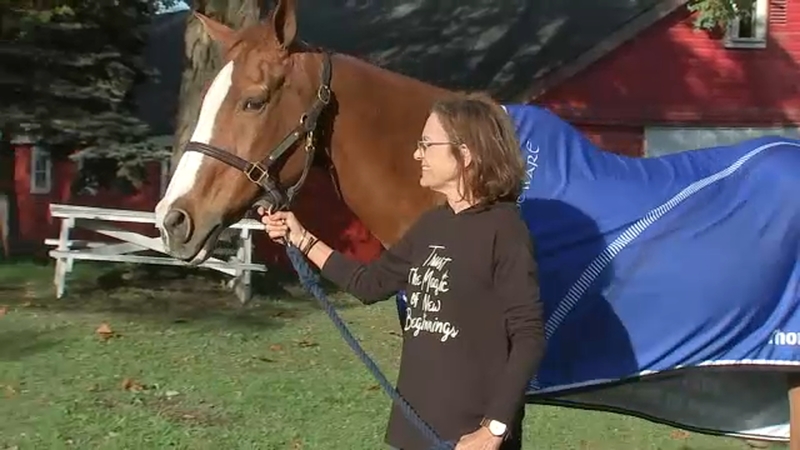 Palos Hills therapy horse honored as 'Thoroughbred of the Year'

PALOS HILLS, Ill. (WLS) -- A thoroughbred with an extensive work resume with the Chicago Police Department and as a former racehorse is getting one of the biggest honors of his career.

It was part of a celebration hosted by a group that offers therapeutic horseback riding in Palos Hills.

For Fahey, it's probably just another day out in the pasture.

However, for so many others who have worked with this 27-year-old thoroughbred named after a fallen Chicago police officer, his impact goes well beyond his stable.

"William Fahey was a Chicago police officer who, in 1982, was killed in the line of duty, along with his partner, Richard O'Brien," said Erin Fahey-Kelly, the daughter of fallen officer Fahey. "It's a wonderful honor to my dad's name."

Fahey participated in 35 races, winning two of them before becoming a horse with the Chicago Police Department. He then later retired at New Beginnings to become a therapeutic horse.

"He has taken some of our most timid riders and given them confidence," said Mary Hensley, the founder of New Beginnings.

Fahey has been with New Beginnings in the south suburbs for more than two years.

Hensley said his time working with mounted Chicago police officers and as a former racehorse makes him the perfect recipient as the group's "Thoroughbred of the Year."

"We call him the hero with a heart," she said.

It's an honor given after years of helping others, with many more to come.