The woman had gone into the water to help rescue a young girl who was screaming for help after getting caught in the current
By Rachel Bidock, Storyful 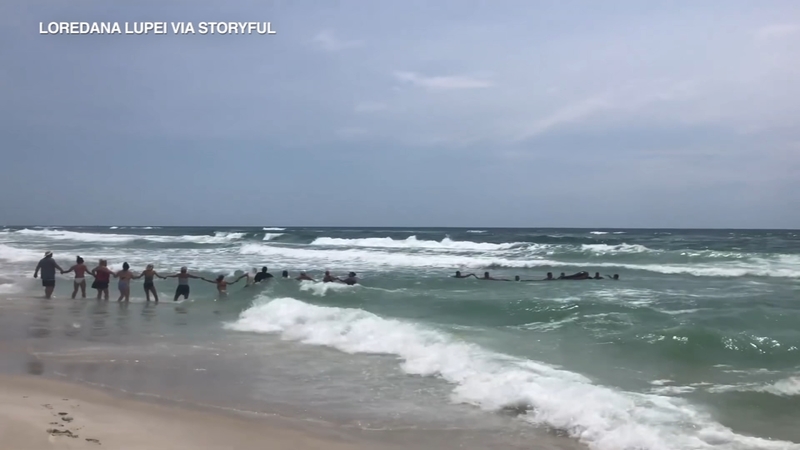 The woman had gone into the water to help rescue a young girl who was screaming for help after getting caught in the current, according to Loredana Lupei, who recorded the video.

Lupei told Storyful she was also involved in the group effort to save the girl - whom she estimated to be around eight years old - grabbing her from another swimmer and safely bringing her to shore.

RELATED: Daily Herald sales executive drowns trying to save 2 kids from Gulf of Mexico in Florida

Once she and the child got to shore, the child immediately ran off, Lupei said.

Lupei told Storyful she then saw that a woman who went in to save the girl was struggling. She said she asked a couple of men with a raft to rescue the woman, but soon they too were struggling.

At that point the beachgoers decided to make the chain, Lupei told Storyful. "People came from all over the beach and held hands in the water. It was really powerful," she said.

RELATED: What is shallow water blackout and how to prevent it

The video shows a group of people linking arms and cheering after successfully bringing the woman back to shore.

Local news outlet WMBB reported that single red flags were flying, indicating dangerous currents. The flags were later changed to double red, closing the water to the public. Beach safety officials told the local news outlet that although the human chain was successful in this instance, they discourage the practice as it could lead to more people being dragged out.
Report a correction or typo
Related topics:
floridasafetywater rescuerescueu.s. & world
WATER RESCUE
Hero neighbor jumps into frozen pond to save 6-year-old girl
Woman pulled from icy Lake Michigan near Navy Pier: CFD
34 rescued after ice separates from main shore on Green Bay
Woman rescued from top of car in Des Plaines River in Forest Park
TOP STORIES
Chicago area COVID testing company sued over alleged scheme
Car with kids inside stolen, crashed on Northwest Side, police say
Cook Co. judge has to do sensitivity training after 'sexist' comments
DuPage County votes to hold Ribfest 2022 in Wheaton
Man charged in murder of Gary businessman, community leader
By the numbers: Stats that tell story of Biden's first year
1 killed, 1 critically hurt in Sauganash crash: Chicago police
Show More
Bodycam videos shows U of C police shooting in Hyde Park
Recent bike shop thefts prompt Naperville store to board up
Voting bill collapses, Democrats unable to change filibuster
Chicago COVID: City past omicron peak, but not out of woods yet
How to avoid tax refund delays for your 2021 return
More TOP STORIES News