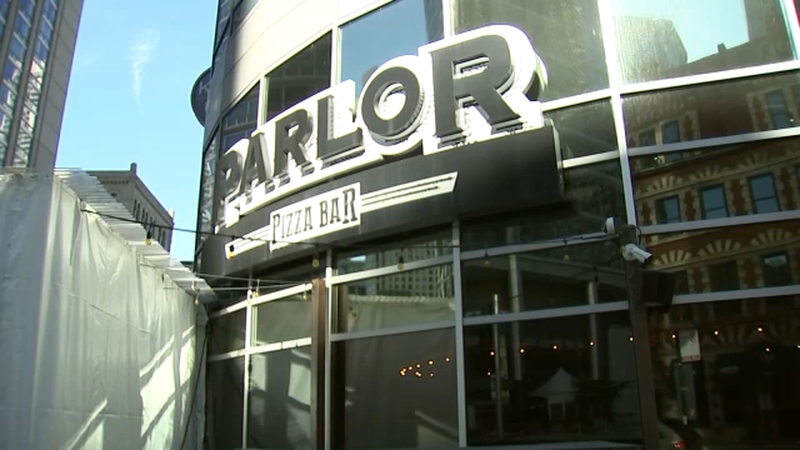 CHICAGO (WLS) -- Chicago officials are investigating allegations that workers at Parlor Pizza Bar were not paid for overtime work and sexually harassed. They're also looking into discrimination against customers based on race and age.

All three locations of Parlor Pizza were shut down last month for what appeared to be a financial investigation.

The signs on the doors of the popular pizzerias, which have storefronts in Wicker Park, River North and the West Loop, said they were closed by the Department of Buildings for an "ongoing investigation" by the Business Affairs and Consumer Protection division.

A number of investigators were inside the locations, most wearing jackets saying "special agents." The investigation appeared to be led by the state Department of Revenue, which typically handles potential violations of the Illinois Tax Act. The department said it couldn't comment on an ongoing investigation.

Parlor Pizza's 3 locations were raided and closed by authotirites Wednesday, who appear to be conducting a financial investgigation.

BACP said at the time that Parlor Pizza holds an active business license and is considered to be in good standing with the city.

But on Tuesday, the Chicago BACP and Commission on Human Relations said they are taking recent allegations that Parlor Pizza Bar violated the city's labor and anti-discrimination ordinances "very seriously."

"The City is working to conduct a comprehensive investigation of allegations that workers were not paid for overtime work, that employees were sexually harassed and that customers were discriminated against based on their race and/or age," a news release said.

BACP is urging current and former employees to step forward as the agency investigates these allegations and works to compensate any workers harmed by unjust business practices.

"Businesses operating in Chicago should be aware that BACP and the CCHR will not tolerate disregard for the City's labor or anti-discrimination laws, and that businesses will be held accountable for any violations. As employers in the City of Chicago, businesses are responsible for fostering safe and lawful working conditions and for ensuring that their accommodations are free from discrimination based on race, age, sex or any other protected class," according to a joint statement from BACP and CCHR.

Any employees who believe they were harmed should contact the Office of Labor Standards (OLS) by sending an email to laborstandards@cityofchicago.org or by calling 312-744-2211.

The CCHR is charged with enforcing the Chicago Human Rights Ordinance and the Chicago Fair Housing Ordinance, and investigates complaints to determine whether discrimination may have occurred and uses its enforcement powers to punish acts of discrimination.

CCHR encourages customers who have visited any of the Parlor locations and believe they were discriminated against based on a protected class which includes race, national origin, age and/or were denied an accommodation related to a disability to contact CCHR by sending an email to cchr@cityofchicago.org or by calling 312-744-4474.

"We firmly dispute these serious allegations and the blatantly false picture being painted of our restaurants, how we operate them and how we treat our valued employees and customers.

We disavow racism and any discriminatory behavior at all Parlor locations and would immediately terminate any employee who acted in such a despicable way.

Respect, dignity and professionalism are the bedrocks of our workplace policies and culture. This is more than a business to us - we care deeply about our hundreds of employees, who are hard-working, dedicated and as diverse as the customers we are proud to serve.

We will fully cooperate with any government agency reviewing our business operations and we are confident that a fact-finding process will disprove the allegations."

To learn more about Chicago's Labor Laws, visit Chicago.gov/LaborStandards. You can also find more information about the Chicago Human Rights Ordinance at Chicago.gov/CCHR.