Flight from Chicago to Mexico diverted after passenger dies on board 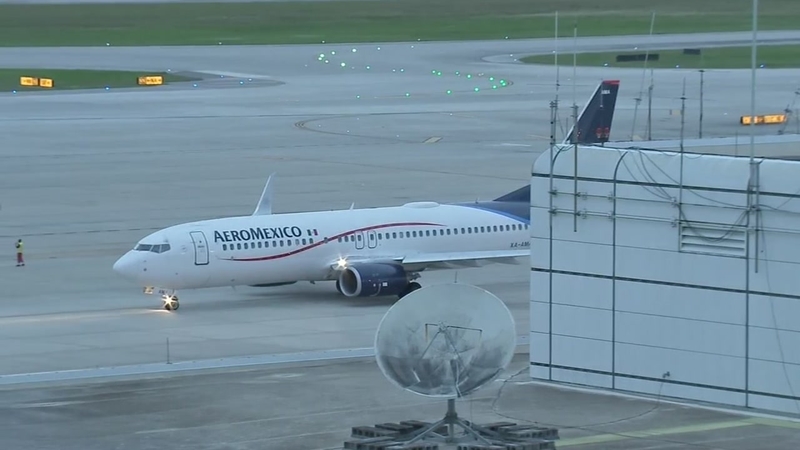 HOUSTON -- We're learning new information about the man who died on board Aeromexico flight 683 to Mexico. That plane had to make an emergency landing at Bush Intercontinental Airport just before 4 a.m. Tuesday.

Police say the 88-year-old man was traveling with his grandson from Chicago to Mexico City to visit family. The victim's grandson, 27, and his daughter, 54, were on the plane with him. His grandson told police his grandfather had a pacemaker and recent heart problems. Investigators say it appears the man died from natural causes.

"We were flying across Louisiana, around Shreveport, when the pilot asked for a doctor, everyone was sleeping," said Fernando Del Rio, a passenger on board.

Del Rio sat about ten rows behind the man who died. He said everyone on board stayed calm, no one seemed to know what was going on.

"All they told us was it was a medical emergency. People started to know something wrong was happening because we landed and after 25 minutes nobody enter the aircraft," Del Rio said.

#AviationGeek A passenger passed away on Aeroméxico 683. From ORD to MEX. Aircraft diverted to IAH pic.twitter.com/XAswBZcFdA

Shortly after firefighters and police did enter the plane, Del Rio says the passengers were asked to get their belongings and deplane so investigators could remove the man's body.

"It's a sad thing because there were a lot of kids on the airplane and they saw the body so not a cool way to start this Tuesday," he said.

After passengers waited in Terminal D for about an hour, they got back on the plane and took off for Mexico City.

Airport officials say someone days coming into Houston airports one to two times a year. Officials say it's up to the airline, the pilot and flight attendants on board to decide to continue to the planned destination or make a medical emergency landing.