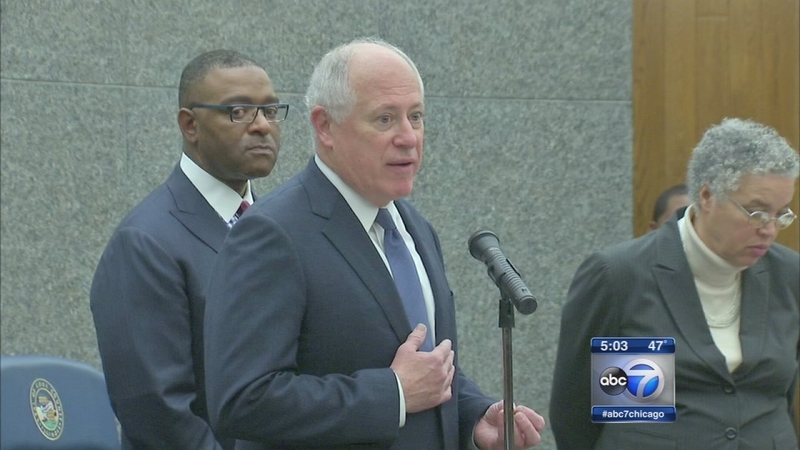 The bill was drafted in response to the crisis involving the Chicago Police Department after the release of a video showing a police officer shooting Laquan McDonald 16 times.

Quinn, 67, spoke Tuesday after the Cook County Board meeting where he accepted condolences on the death of his mother, Eileen Quinn, 98.

"She did the hardest thing in life and she did it very well. God bless her mortal soul," Quinn said of his mother.

As he left, Quinn, who rarely speaks on state issues since leaving the office 11 months ago, said the only way to resolve the state's budget impasse is with a tax increase.

:You can't have a government that doesn't pay its bills. In order to do that you have to have revenue," Quinn said.

He also spoke about Gov. Bruce Rauner's demand for reforms.

"When you call reform trying to break unions, that's not reform and everybody knows that," Quinn said.

He also said he supported a recall bill filed in Springfield last week that would make it possible for city voters to un-elect Chicago Mayor Rahm Emanuel before his term ends.

"Frankly, I think we should have all offices subject to recall because that keeps every office-holder on their toes, 24 hours a day, every day of their term," Quinn said.

The mayor, who is facing calls for his resignation due to inaction in the Laquan McDonald case, said he had more important things to do than worry about recall.

"This is a time for real solutions to a real challenge. My focus in on the challenges ahead of the city of Chicago, building a stronger future," Mayor Emanuel said.

If passed by the general assembly and signed by Governor Rauner, the recall bill would make it possible to circulate petitions and gather enough signatures to authorize an up or down vote on the mayor.

"I believe in petition-passing and giving people a chance to have their say on issues as well as candidates and I look forward to doing that in the future," Quinn said.

The former governor said he now spends most of his time volunteering, but did not specify for what programs or projects. He said he has no plans to run for another elected office.