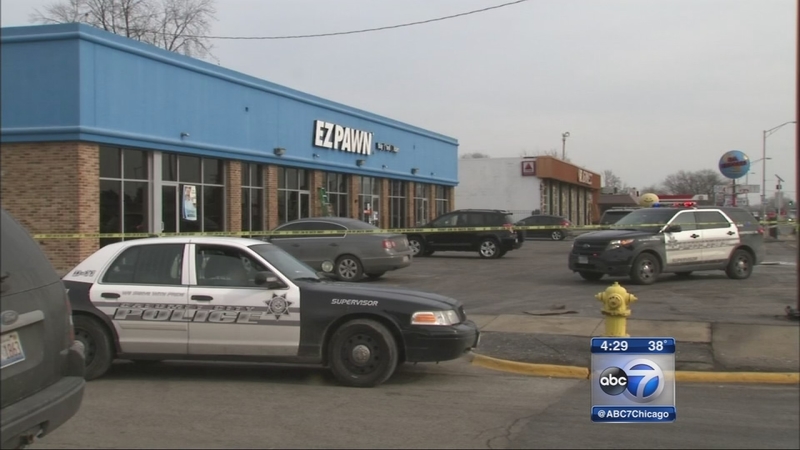 CALUMET CITY, Ill. (WLS) -- One of two masked men who attempted to rob a Calumet City pawnshop Monday morning was shot and wounded when a customer grabbed the offender's gun.

The armed robbery who was shot was in his 20s and remains hospitalized. A second would-be robber escaped before police arrived.

Police in Calumet City are searching for this man. Anyone with information is asked to call 708-868-2500.

The shooting happened at about 11 a.m. at the EZ Pawn. There were three employees and one customer in the store at the time. The man who was shot tried to get the employees and customer into a back room when the customer reached for his gun and shot him in the chest.

"The weapon was in sight of him, close to his head, being pointed at his head. He grabbed it, they wrestled to ground fired off struck suspect," said Tom DiFiore, Calumet City's assistant police chief.

The store remained close on Monday after the shooting. The owners declined comment.

The employees were able to get out, leaving the customer on his own wrestling with the robber, police said.

The struggle between the two lasted four minutes. The entire incident was captured on surveillance video.

Police said the customer is in his late 50s and is a veteran.

"Heroic. It's good to see that that happened, unfortunately, someone was shot, don't want to see that, but at least we have an offender in custody because of it," DiFiore said.

The second offender who fled left behind a mask that police found on a neighbor's bush.

In the meantime, Monday's attempted robbery is the third time EZ Pawn has been targeted in the past couple years.

"They need to get a buzzer doors and bullet proof windows to protect their store," said local resident Sonya Williams.

Police are still searching for the second suspect, who remains at large. Police are asking anyone who may have seen him to call the Calumet City tip line: 708-868-2500.