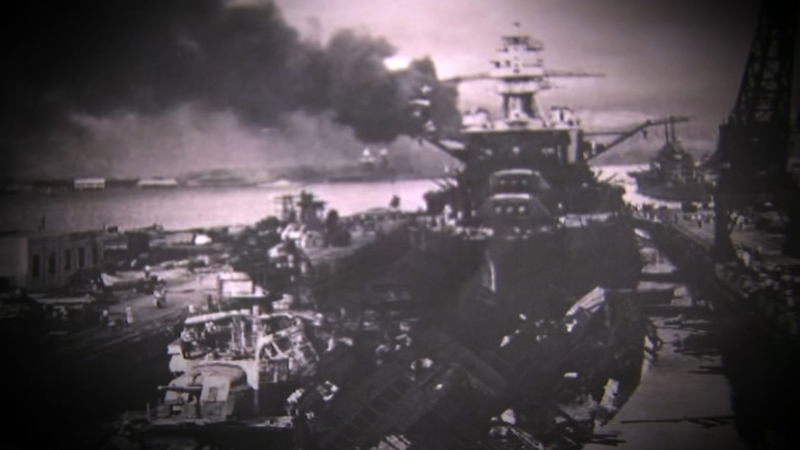 GREAT LAKES, Ill. (WLS) -- The last of the Illinois Pearl Harbor Survivors have passed, but their children continue to honor their parents' memories.

A two-bell ceremony rang out Thursday, honoring lives lost on December 7, 1941, as those dearest to them silently honored those who survived the attack on Pearl Harbor.

On December 7, 1941, Japan launched a surprise attack on the U.S. naval base at Pearl Harbor.

Pat Clary, of the Sons and Daughters of Pearl Harbor Survivors, was the daughter of Dean Garrett, a hospital corpsman stationed the U.S. Naval Hospital.

"As the guys were brought in from the water and from the ships, he was there in the surgical unit during the attack," Clary said.

For the first time, the Pearl Harbor commemoration was hosted on Naval Station Great Lakes. It's the same place where Bob and Eric Miller's father, Clarence, trained before he was shipped out to Hawaii.

"If I had hair on my arms, it would stand up," Eric Miller said.

The Miller brothers have made it their mission to organize these events over the years to honor their father and other survivors, even in death, as well as those who made the ultimate sacrifice.

"It's gone full circle, from Chicago to senior home to now at the place where dad went to basic training 78 years ago. He was standing in a field right here," Miller said.

In addition to family of those who survived, were veterans and new recruits.

"We do care about history. We care about history in a way that we want to commemorate a lot of folks who passed away and also the heroism and events that took place," said Capt. Raymond Leung, Commanding Officer, Naval Station Great Lakes.

"They were the greatest generation. That may seem mundane now, but it really was true. The way that they raised us, we're all very grateful for that," Clary said.