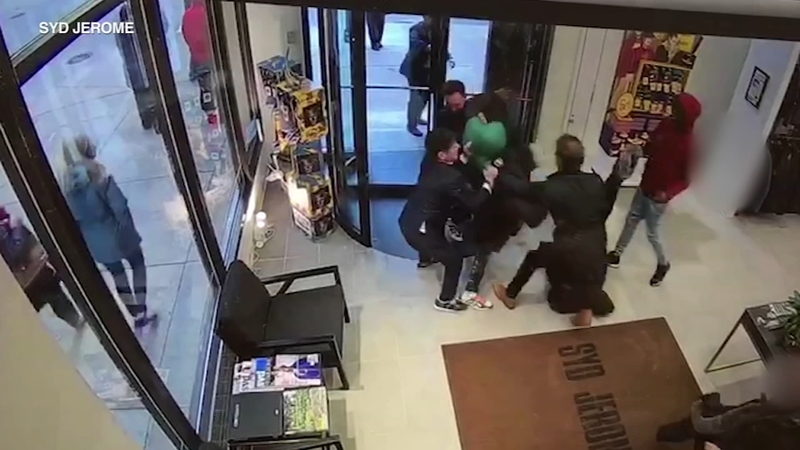 CHICAGO (WLS) -- A man is recovering after being thrown into a display case when he tried to confront four robbers in a designer men's clothing store in Chicago's Loop Friday afternoon, police said.

Scott Shapiro suffered a broken finger and numerous lacerations as a result of the violent robbery.

Shapiro works at Syd Jerome, a high-end men's clothing store located near the intersection of Clark and Madison streets. Chicago police said four young men entered the store at about 2:15 p.m. and grabbed expensive merchandise. As the robbers attempted to leave, a witness confronted them.

"Patrons helped," Shapiro said. "They jumped in. One of the customers tackled one of the guys. I was holding onto one of them by the revolving door."

The incident was captured on store surveillance cameras.

Surveillance shows struggle between employees, customers and thieves who tried taking off with merchandise from the Syd Jerome store, 20 N. Clark, Friday afternoon.

Shapiro said the thieves managed to get away, dropping some of the merchandise but leaving with plenty more. The four drove west in a red vehicle, according to police.

The heist comes as downtown retailers raise concerns about similar brazen thefts, some saying thieves are emboldened by changes made by Cook County State's Attorney Kim Foxx, who raised the felony threshold for theft from $300 to $1,000.

Foxx said the change has allowed her office to focus more resources on gun crimes.

Shapiro said he'd like to see more cops on foot, especially during the holidays.

He said it's the third time in recent months thieves have attempted or succeeded in this type of theft at his store.

"As a merchant, we shouldn't have to deal with these problems, but it's become more pervasive over the years," Shapiro said.