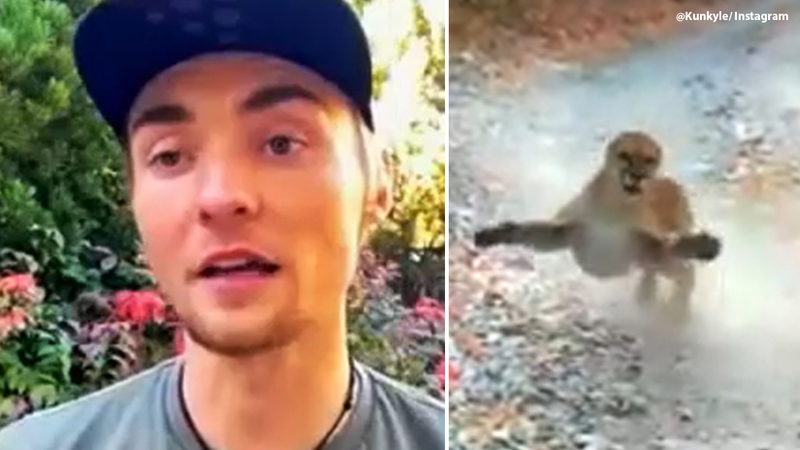 PROVO, Utah -- The man whose terrifying encounter with a cougar on a Utah hiking trail was captured in a now-viral video is recounting his experience after he managed to escape unscathed.

Kyle Burgess was already six miles into a run up a wooded canyon trail when he suddenly spotted cougar cubs on the path ahead. Moments later, the babies' mother started stalking him along the trail.

Burgess kept walking backwards while keeping his eyes focused on the wild cat.

A man's terrifying encounter with a cougar on a hiking trail in Utah has gone viral after he managed to record a six-minute video of the incident.

He is no stranger to the great outdoors, his Instagram account filled with shots of his hiking and traveling adventures, but he never experienced anything like this.

"Really what I think it was, is yeah, mom was just doing her job. She was protecting her babies and so that was kind of my thought process... to get away from the babies and hopefully she'll leave me alone," Burgess said.

A mountain lion in Pacifica appeared to have its eyes in a group of children. That's when Timothy Kerrisk decided it was time to intervene.

What ensued was a six-minute standoff with the animal as it continued to trail him, occasionally lunging at the hiker with its claws bared. Burgess tried to scare the mother cougar away by making loud noises.

He eventually picked up a rock and threw it at the big cat who then took off and presumably went back to her cubs.

Burgess says despite the frightening encounter, he will go trail running again.

"For me, this is my hobby, something I love to do. I love being outside... on the trail and so I'll definitely be back out there."

Cougar attacks are incredibly rare, but if this ever happens to you, do not run. Experts say the best thing to do in the face of a big cat like that is to slowly back away.