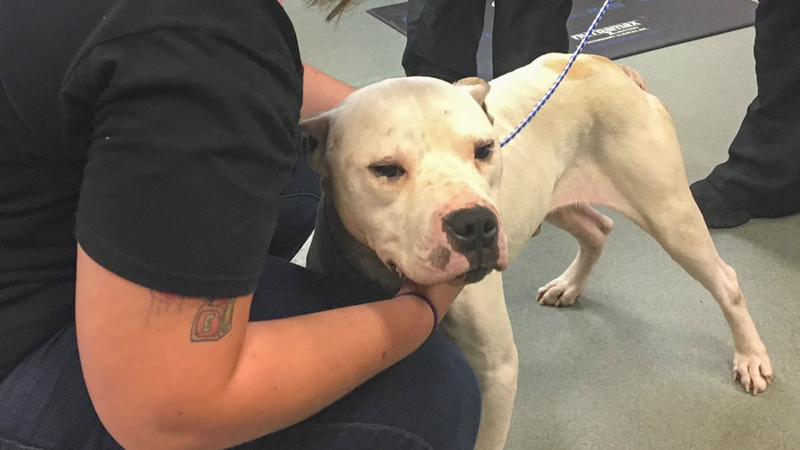 Zeus on the mend, ready for a new home

ROCKY MOUNT, North Carolina -- A dog found on the side of a Wilson County road is looking forward to finding his forever home.

Almost two weeks ago, Zeus was found on the side of Graves Road. He was surrounded by trash and had severe injuries to his private area.

Talia Sutton was driving down Graves Road when she found him.

"He looks way better," said Sutton during what will likely be her last visit with Zeus at Riverside Veterinary Hospital in Rocky Mount. "He's a lot cleaner that's for sure! And happier, like I said when I found him he was shaking and you can tell he's starting to gain some weight back."

Veterinarians at Riverside have been treating Zeus since he came through their door. They work with a rescue group out of New York City called Rescue Dogs Rock. The group has been overseeing Zeus' care and on Thursday, they will take him to New York City to continue his recovery and put him up for adoption.

This is positive news, but the staff at Riverside say they've definitely grown attached.

Dr. Chandra Meachen Tucker is one of Zeus' veterinarians. She said he has a healthy appetite, eats three times a day, he has a great temperament, and has become very playful and loving.

Remember Zeus? He's getting some of his last hugs from the woman who rescued him ❤️Update at 5. Background: https://t.co/l0wqTyebHc #ABC11 pic.twitter.com/i3KE1smHB3

As for his injuries, they were not able to save his "anatomy" and when he was under anesthesia they noticed an injury to his tail that raises suspicion over how he may have been injured.

"We ended up having to amputate his tail and it did look along the same line as the private area injury so it is quite suspicious," said Meachen Tucker.

Animal control in Wilson County has been investigating and ask that anyone with information to come forward.

They're also looking for anyone to come forward with information on a bag with two dead puppies that was found near where Zeus was found one day later.

"It's been confirmed that the two puppies that were located died of intestinal parasites," said Wanda Samuel, Chief of Staff with the Wilson County Sheriff's Office.