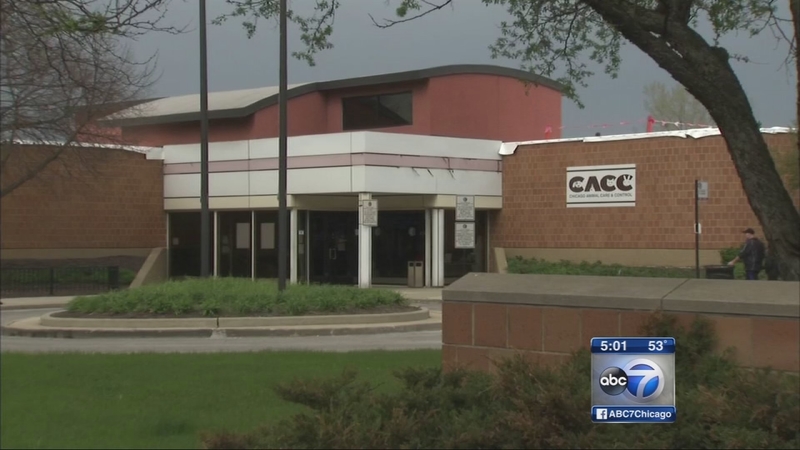 CHICAGO (WLS) -- A dog survived for several days after it was mistakenly left inside a Chicago Animal Care and Control van. The dog was discovered Friday by city workers, who called police.

There are at least three investigations underway after Chicago Police confirmed that an employee with Animal Care and Control left a female pit bull mix named Missy inside a van.

Animals are adopted by loving families at Chicago Wolves games through the Adopt-A-Dog program and, generally, animal control employees take 10-15 dogs to each event.

Friday morning, days after the event, Chicago Police got a phone call just before noon. Police say the kennel van was parked in a lot on South Ashland. Police say it was an accident and they do not expect any criminal charges.

The dog is now back at Animal Care and Control, according to the deputy director. He said a vet checked out the dog and that she's playful and doing well.

ABC7 Eyewitness News has also learned that the inspector general's office is now conducting an investigation. Animal Care and Control is doing an internal investigation as well.

"As soon as we learned of this incident (Thursday) we immediately had our veterinarian give the dog a complete medical examination, which found no health issues," said Brad Powers, Animal Care and Control." The medical staff will continue to monitor the dog. We take this seriously because it is completely unacceptable and not in keeping with the level of care we expect our employees to provide. We immediately initiated an investigation of this matter and referred it to the Inspector General. Depending on the outcome, disciplinary action is certainly possible. The Police are also investigating the incident. While preliminarily this appears to be an accident, nothing like this has ever happened before and we are committed to ensuring it never happens again."

The Wolves chairman has released a statement saying, "It's disappointing to have anything like this happen. We feel horrible about it. We've had almost 1,300 dogs adopted at our games over the last several years and this is the first time anything like this has occurred. While the Wolves do not have any control over the personnel ACC employs at our games, we will request that the person who is responsible for this unconscionable, life-threatening mistake is never involved with any Wolves activities in the future."

Police said they do not know specifically how many days the dog was left inside the van.