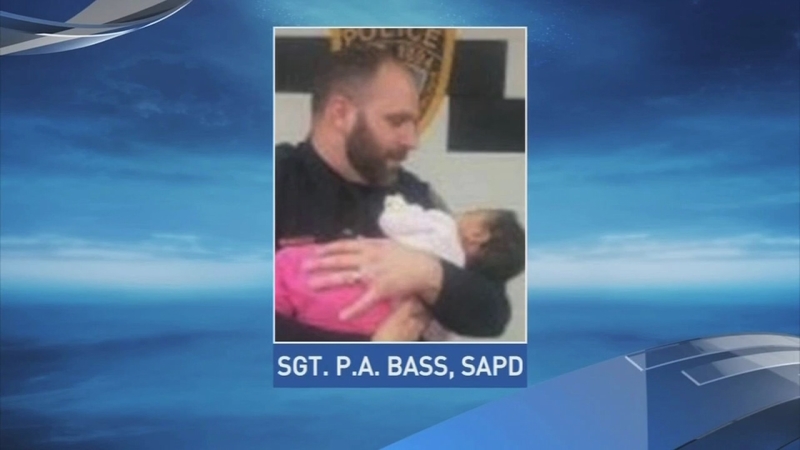 ST. ALBANS, W.Va. -- Police officers encounter some incredible challenges every day, but a West Virginia sergeant had to take on an entirely different role.

He had to temporarily play daddy, and the picture of him cradling the little one is going viral, WCHS-TV reports.

It's the picture that's getting a lot of love for the St. Albans Police Department. A tender moment - Sergeant Philip Bass cradling a baby rescued from the Kroger bathroom.

"I couldn't believe what was happening. With my kids, I couldn't imagine that happening to them," Bass said.

The initial call was over a shoplifting incident at the store.

"They were stealing a Christmas tree, one of the employees came out and said, 'Hey, we got a problem inside,'" Bass said.

In the bathroom, police say 39-year-old Donnyell Harrison of Tornado, W.V., had been locked in there about 20 minutes or more and yelling at the child who was crying...

"The lady let us in the bathroom and then we saw her, and this little baby, she was sitting in a buggy with a baby bottle of Dr. Pepper," Bass said. "And she said, well I didn't have anything else to give her! And I said, 'Well, you're in Kroger!"

"Some obvious signs of drugs around, there were some pills, a lot of pills visible," said Police Captain James Agee.

Harrison, who is not the baby's mother, was arrested and charged with possession with intent to deliver.

Bass, who is a father of three, cared for the baby for more than four hours until Child Protective Services arrived.

"Gonna have to be dad and take care of the child," Bass said. "It's really heartbreaking, especially for that baby."

A Kanahwha deputy bought the little girl toys and St. Albans police bought her diapers, a bottle and juice. They're all being called heroes.

The baby's mother is in jail. She told police Harrison did have her permission to care for her little girl.

The baby is in the custody of Child Protective Services and will be placed in foster care.