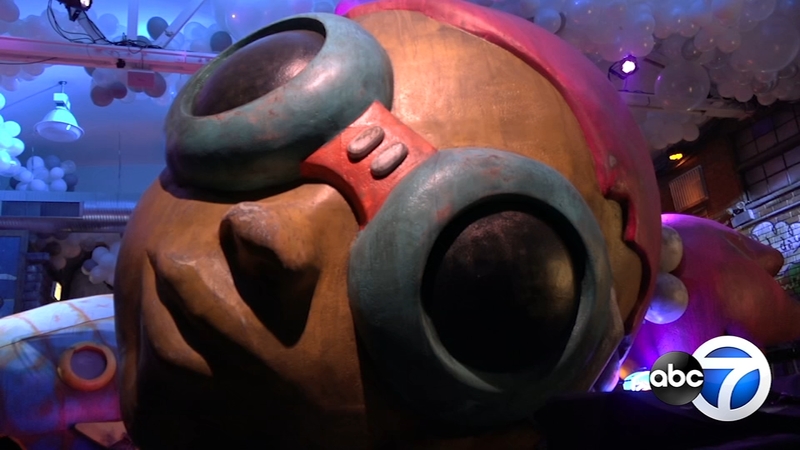 "This thing was intended to have a sense of escapism a sense of the fantastical," Brantley said. The artist is best known for his aviator-goggle-wearing characters "Flyboy" and "Lil Mama." "Nevermore is the first time that there's been any sort of prescribed narrative to the characters," he explained.

Brantley, who grew up on Chicago's South Side, has his work all over the city. Two of them are in Pilsen, one on Peoria Street and one on 18th Street. Now, he's bringing the characters to life. Nevermore Park is an interactive exhibit that addresses the themes of nostalgia, power and hope. Brantley's installation includes locations that have deep, personal meaning.

"The newsstand one is a key location in the story," he said. "It sort of has its personal reference to me because you know as a kid who grew up on comics and cartoons I've spent a lot of time on Michigan Avenue at the newsstand before they sort of became obsolete."

The other key location in the exhibit is known as "Kirby's," the hangout spot for Brantley's characters

"I think it's sort of the amalgam of, like, my experiences growing up in Chicago, you know, being a kid from the South Side. It is an exploration of youthful expression, it's an exploration of community; people coming together and, you know, having a general sense of self and that worth and appreciation. And I think a lot of the characters really exude that," he said.

His characters are favorites of Chicago native Chance the Rapper. The artists teamed up in 2016 for Chance's "Angel's" music video, which was an homage to Chicago.

Brantley hopes the public experiences his characters on a more intimate level.

"Those characters were only seen in galleries or museums, and I wanted to sort of expand that and create a space that allowed people to participate a little bit more," he explained. "I hope that you know people can just walk away feeling a bit inspired."