Pilsen property owners fear displacement with historic landmark proposal: 'The problem is that it's not helping the owners' 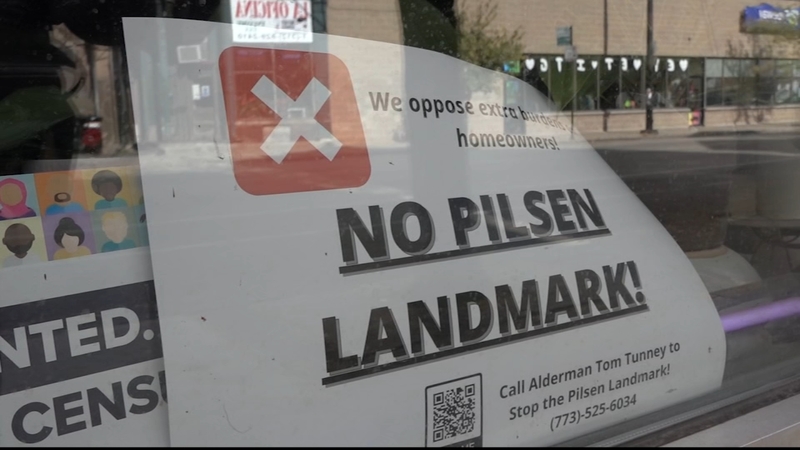 CHICAGO (WLS) -- On the corner of 18th place and Throop Street in the Pilsen community, you'll find Socorro Gutierrez's home and business, both of which she had proudly owned since the 1980's. Her property is one of 465 buildings that is being considered a historic building under a proposed historic landmark ordinance.

It's an ordinance that Gutierrez said could eventually displace her and a number of other Latino property owners in the community.

"Its really bad to make Pilsen Historic because that would increase costs for repairs. Our community does not have the resources to do it. That would further the displacement of our community," said Gutierrez.

Two years ago, City Officials proposed designating part of Pilsen as a Historic Landmark District. It could be one of the largest in the city and the only Latino neighborhood deemed historic.

Peter Strazzabosco of Planning and Development said, "The purpose of the district is to mitigate ongoing demolition trends that have replaced more than 90 properties in recent years with larger, more expensive structures and contributed to the displacement of approximately 14,000 Latino residents from the neighborhood over approximately the same period."

The plan outlines the costs the property owners would face if seeking a building permit for repairs. According to this handout from the Department of Planning, costs for repairs will not increase under the ordinance.

City Officials added special provisions to the ordinance. One being an incentive that includes a property tax assessment freeze. According to the city, o qualify for this incentive there is a minimum investment of 25% of the property's market value. Gutierrez said this is not financially viable for her and other Latino property owners.

Vicky Lugo, whose mother owns a building considered historic, said owners would face additional hurdles to maintaining their buildings. One example she gave is having the building permits reviewed by the preservation staff that she said could potentially elongate the permits accepting rate.

In response to the residents' concerns, Alderman Sigcho Byron Lopes has proposed a new ordinance.

Under the proposed ordinance, the city would not allow the city to accept demolition applications unless buildings are considered imminently dangerous, a temporary hold off on demolitions until April 2021, and the Department of Housing examine housing stability and the reduction of affordable housing in the city.