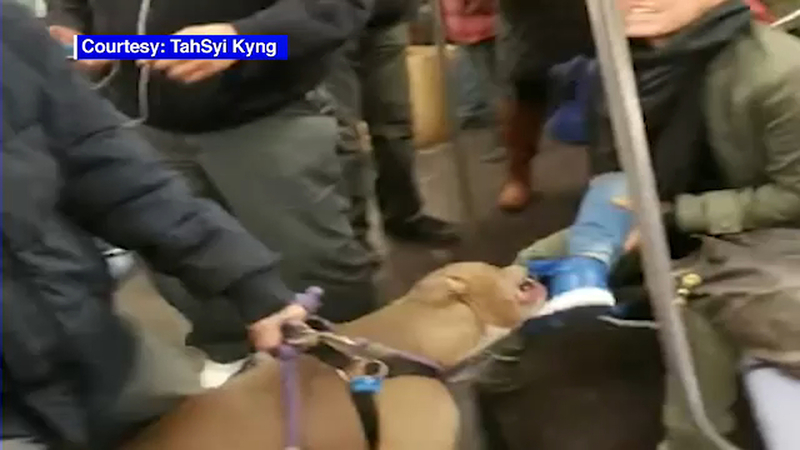 LOWER MANHATTAN -- Police are investigating a pit bull attack on the subway in Lower Manhattan after a dog latched onto a 22-year-old woman's shoe.

Eyewitnesses believe the people were the problem, not the pet. Now authorities are looking for the dog's owner.

In a 60-second video, the pit bull can be seen latching onto a young woman's shoe and refusing to release until the sneaker comes off. Then the owner is seen throwing the shoe at the other riders.

"You should've had your dog in a bag, kennel, muzzle. It wasn't a service dog," said TahSyi Kyng, an eyewitness.

It was 4 p.m. Friday. Tahsyi Kyng and his girlfriend were on the downtown #4 train to pick up their kids when a man entered the subway with his pit bull, Vinci.

"The dog sat on my foot and I really didn't mind it much,." TahSyi said.

When room opened up across the aisle, I'm told the man sat down and put his dog on the seat. As the dog lay down, TahSyi says the pet bumped a female passenger on the other side

From there, it went downhill quickly. TahSyi, who took the video, said the woman pushed the dog off the seat. The owner put him back up. She shoved the dog off again. The owner responded with fists.

"He was like, 'Don't touch my dog,' and he started hitting - they started fighting - and everybody tried to break it up. The dog latched onto her," TahSyi said.

In the struggle to get the dog off, other passengers are heard yelling at the owner to have the dog release.

As the train pulled into the Wall Street stop, the owner can be seen leaving with his pit bull. The conductor eventually came into the car to assist the female passenger.

"That dog was not vicious," said Denise Leon, an eyewitness. "It was just an incident that could have been avoided."