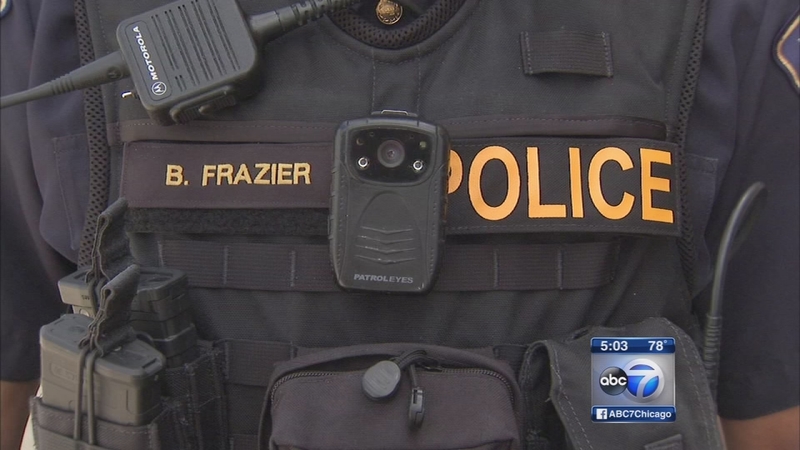 CHICAGO (WLS) -- A new Illinois law sets standards on how police departments use body cameras and when the public can see those recordings.

In south suburban Lynwood, police body cameras are already in use. Every traffic stop, every interaction with the public for law enforcement purposes is recorded.

"It's going to protect me and protect my job because I have a family to go home to at the end of the night," Lynwood Police Officer Brandon Frazier said.

Office Frazier isn't talking about his bulletproof vest or gun. He's talking about the body camera he's wearing. He thinks it will protect him from the most common threat: complaints.

Every on-duty officer in Lynwood has a camera clipped to his or her chest. New legislation signed by Gov. Rauner on Wednesday pushes more departments to follow Lynwood's path.

Under the law, cameras will be required to record law-enforcement related interactions; they will only be turned off at the request of crime victim or witness.

To pay for the police body and in-car cameras, drivers who are issued traffic violations will pay an additional $5 fee.

"Let's not be delusional to think this is going to be a cure all," State Senator Kwame Raoul, a sponsor of the bill, said. "Illinois has set the standard, set the standard nationally."

"There is no way to capture every moment, the perfect angle for every confrontation, which is why we're still using car cameras in addition to the body cameras," Lynwood Police Deputy Chief Terry Shubert said.

Officers like Frazier say their experience is body cameras offer one more way for "everyone" stay safe.

"When they know they're on camera and they know everything they're doing and all their reactions are being recorded, they stop and think twice and often calm down," Officer Frazier said.

The new law goes beyond cameras in an effort to address concerns about police conduct. It requires departments to collect data on people who police "stop and frisk" and give those people a detailed receipt explaining why the encounter happened.

When a police officer is involved in a death, two independent agencies will investigate.

"We are taking steps to strengthen the relationship between our law enforcement officers and the public they protect," Rauner, who signed the bill in private, said in a statement. "It will have a lasting and positive impact on the people of Illinois."

Illinois is one of three states to approve comprehensive plans for police practices.
It fully takes effect in January 2016.