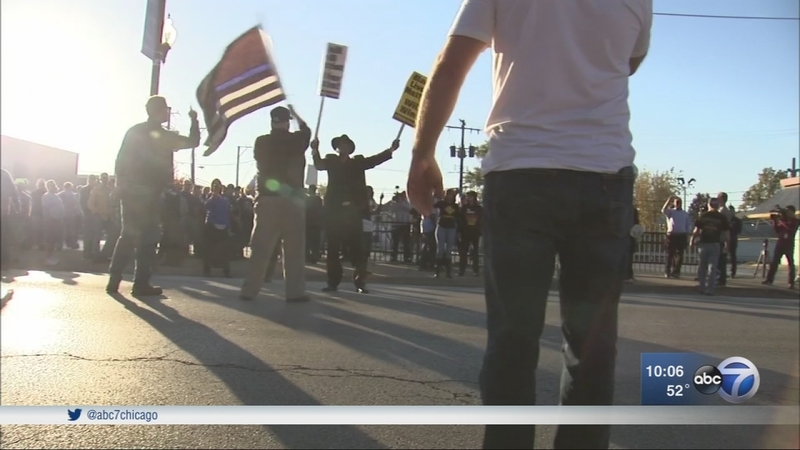 CHICAGO (WLS) -- Protesters clashed Sunday afternoon near the site of a deadly police shooting of a 25-year-old man in Chicago's Mount Greenwood neighborhood.

Investigators said Joshua Beal, of Indianapolis, was armed when a confrontation between him and officers resulted in him being fatally shot. However, family members dispute the police narrative.

Michael Beal, Joshua Beal's brother, was charged with aggravated battery to a police officer, resisting arrest and attempting to disarm a police officer, a Cook County State's Attorney spokesperson said Monday. He is scheduled to appear in court at 1:30 p.m. Tuesday.

"Nobody should have to sit there and witness their brother get killed by the same people who are supposed to protect the us," said Beal's sister Cordney Boxley.


According to police, the shooting occurred after a vehicle leaving funeral services at a nearby cemetery stopped in traffic in front of a Chicago fire house near West 111th Street and South Troy Street. An off-duty firefighter told the driver that they were illegally blocking the fire lane. The occupants exited the vehicle and a verbal/physical altercation ensured, police said. An off-duty Chicago police officer was inside a nearby business and assisted the firefighter.

"At that time, a subject displayed a weapon, an off-duty CPD sergeant was on his way to work in uniform observed the subject. At that time shots were fired, and the subject was fatally struck," said Chicago Police Superintendent Eddie Johnson.

According to family, an off-duty officer in an unmarked vehicle cut off one of the vehicles in the funeral procession. The family members and officer got out of their vehicles. After a verbal exchange, gunfire erupted but Beal's family said that he did not provoke the officer, and merely disclosing that he had a concealed weapon permit.

"Chicago police gunned my baby down like a vicious animal," said Tiffaney Boxley, Beal's mother. "They shot him twice in the back and three times in his front."

Video circulated online on Sunday that claimed to show Beal holding a gun.

"The problem is everybody is making their assumptions based on the little stuff they see, the picture, the video. No one knows what happened," activist Ja'Mal Green said.

The video appears to capture the tense moments before the shooting, showing at least two people with their guns out. In another video, gunshots can be heard.

CPD Communications Director Anthony Guglielmi tweeted Monday that private cell phone video and photos of the incident are authentic - they had not been doctored or altered using Photoshop.

"As I'm looking, I see the officer shoot the man. He ran around the car and he shot the man. The gun went off thirteen times," Nelson said.

The officers involved will be placed on routine administrative duties for 30 days.

Marist High School said it is taking action for a student's racially-charged post on social media reacting to the shooting. This statement was posted on the school's website:

"This evening Marist High School was made aware of a racially charged post on social media involving Marist students. We are devastated by this situation. Disciplinary action is being taken. Marist is a diverse community, made better and stronger by that diversity. As a school community, we continually work so that each student feels welcome, valued, and safe. We have been and will continue to engage with diverse student leaders to give a voice to all students and to focus on shared values. Given the tenuous times we all are living in, and recent events nearby Marist High School, our mission to make Jesus known and loved is more pertinent than ever. As always, the safety of our students is of utmost importance."
Related topics:
mt. greenwoodchicago shootingpolice shooting
Copyright © 2022 WLS-TV. All Rights Reserved.
RELATED
1 dead in police-involved shooting in Mount Greenwood
TOP STORIES
Security guard shoots man in buttocks at Millennium Park
Chicago mass shooting victim ID'd as father of 2, with twins on way
9 shot, 2 fatally, on Near North Side
Postal police say they are sidelined during time of heightened crime
New hotline aims to help those struggling with opioid, substance abuse
Officer relieved of powers after teen carjacking suspect shot: CPD
Chicago Weather: Occasional showers, thunder Saturday
Show More
United cancels couple's flight, charges $4K more for same seats
Teen charged with killing man after kicking him in head in CTA attack
Great Lakes Piping Plover chick Imani spotted in Minnesota
Doja Cat drops out of Lollapalooza due to throat trouble
Legendary Cubs pitcher 'Fergie' Jenkins immortalized with statue
More TOP STORIES News