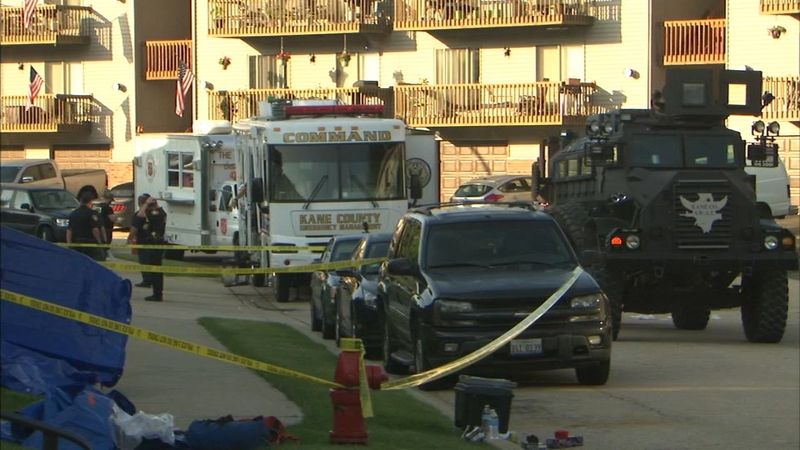 South Elgin police said officers responded to a call of shots fired in the 300-block of Woodridge Circle at about 10:50 p.m. Tuesday. When officers arrived, a man in an apartment building fired at least two shotgun rounds at officers as they exited their squad car.

Three officers were shot. Police said the officers are in good condition.

"On a scale of one to ten, it was like definitely a nine because you would never expect it to happen in your own neighborhood," said neighborhood resident Abbey Placido.

The entire area was blocked off for hours overnight and the residents in the building were evacuated because the man holed himself inside an apartment with a shotgun and rifle with a scope. SWAT team members were trying to negotiate with him.

Police said an officer shot and killed him in an apartment stairwell around 2:30 a.m. after he fired at officers again.

"I don't know all the back and forth, all I know is he had tried to speak with the officers and he initially told our officers that if they came near him, he would shoot them," said South Elgin Police Sergeant Mike Doty.

Authorities released the identity of the suspect as Frank Dripps, 52. Police said Dripps lived in the building with his wife.

The Kane County Sheriff's Office said Wednesday that their officer was treated at a hospital and released.

"About 2:30 a.m. when the final gunshots happened, and then that was scary. I dropped to the floor," said neighbor Amanda Pomplin, who captured the incident on cellphone video.

Neighbors said that Dripps had not lived in the condo building long and described he and his wife as friendly, although he may have had several prior arrests in California.

Eleven different police agencies responded to the incident. No one else was hurt.

Police said that they have had no contact with Dripps prior to this incident.
Report a correction or typo
Related topics:
south elginpolice officer injuredpolice involved shootingpolice officer shot
Copyright © 2021 WLS-TV. All Rights Reserved.
More Videos
From CNN Newsource affiliates
TOP STORIES