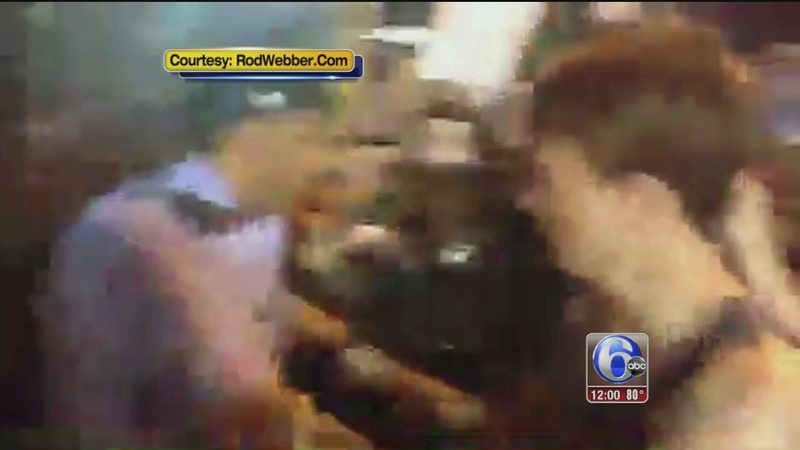 PHILADELPHIA -- Several people were arrested and a woman was badly burned in separate incidents Wednesday night outside the Democratic National Convention in Philadelphia.

It was around 10:30 p.m. when demonstrators gathered at the security perimeter at the Wells Fargo Center.

Police say about six to 12 masked protesters breached the fence, but police quickly converged, restored the fencing, and made those arrests.

Commissioner Richard Ross said police tried to warn those protesters of the consequences of breaching that fence.

"We told them, 'it's a federal fence.' They decided to do it and were taken into custody immediately," Ross said. "I don't understand why they did that."
"They had to know that was going to happen," Ross continued. "It's not like they didn't see the police officers standing there, waiting for them to come over."

In a separate incident, a woman's leg was badly injured during a flag burning.

A woman catches fire after stomping out a US flag lit with lighter fluid. She is being treated for burns @PennLive pic.twitter.com/D5FM7d9xF8

The protester's clothes caught on fire while trying to stomp out the flames on a burning flag. The protester dropped to the ground and rolled around to put the fire out.

Earlier Wednesday, demonstrators protesting the media's coverage of the presidential election tied themselves to a railing at the Comcast Center in Philadelphia as the city prepared for Day 3 of the Democratic National Convention.


The protest began before noon Wednesday at the building located at 17th Street and JFK Boulevard in Center City.


A number of protesters were able to make it inside the building and zip tied their hands to the railing.

Police arrived and removed them from the building. All were cited.

Once outside, demonstrators held up signs reading "report the truth" and "your voice was stolen by the mainstream media and donors." They chanted "We've been given a false choice in this election," while Philadelphia police stood outside the entrance.

PHOTOS: The 2016 DNC in Philadelphia