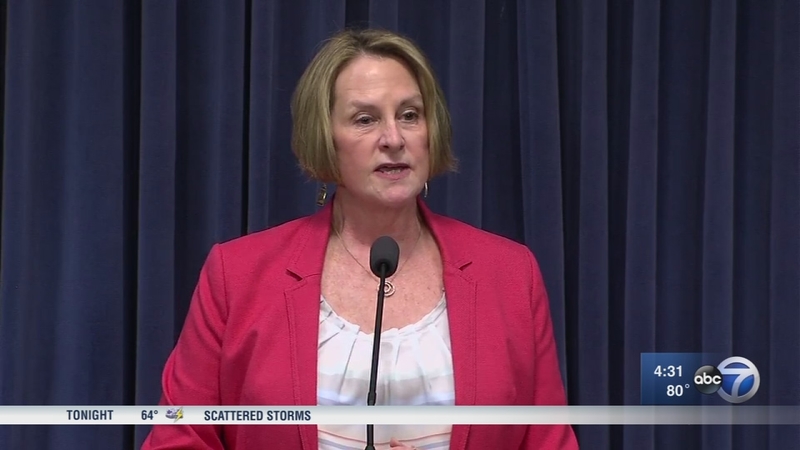 In a statement, Radogno said, "I have done the job to the very best of my ability and always with the needs of the state and my constituents in mind. I am proud of my legislative accomplishments - none of which were achieved alone. I have always appreciated the support, advice and counsel of my colleagues in both parties, staff and family."

She continued, "Effective close of business on July 1, 2017 - the start of the new fiscal year - I intend to resign my position as Senate Leader and Senator from the 41st District."

Radogno said she had been planning to call it quits since earlier in the year, and made the decision to finish her term on at the end of the fiscal year regardless of whether a budget deal was in place.

She received hugs of support from fellow lawmakers after making her announcement. Her 20 year career will come to a close after a frustrating regular and special session that has seen Illinois reach an unprecedented financial crisis.

She said she was not leaving out of frustration with a lack of support from the governor.

"I feel strongly the governor has the right agenda, but it's not that easy getting there. We need fundamental change in this building, but we need to compromise in order to get there," she said.
She said a process is already in place to pick her replacement, and that her decision is also based on some personal reasons. Her daughter, Lisa Radogno, died of a massive pulmonary embolism weeks after she was hit by a car.

The finalists to replace Radogno as Republican Leader are Senator Bill Brady and Senator Karen McConnaughay. A meeting will be held Friday morning to make a decision.

Radogno was praised by her colleagues on both sides of the aisle.

"She leaves with a reputation for hard work, honesty, integrity, forthrightness. A credit to the institution," said House Speaker Michael Madigan.

She thanked Senate President John Cullerton specifically in her announcement, and Cullerton said Thursday he hopes she may have a few more tricks up her sleeve to end the budget mess.

Radogno will continue to work on a budget deal before she leaves. Other leaders expressed hope a deal can get done.

"It leaves a big, huge, gaping hole to fill if we're going to, if we don't get something done by the end of the tomorrow," said State Senator Kwame Raoul (D-Chicago).

Asked what this will do to the budget negotiations, Raoul responded, "Hopefully it will speed them up."

"I'm always optimistic. I want to make sure the state will avoid going into junk status, and we're going to work as hard as we can. I don't know how many hours are left, but I've got a positive attitude that we can get this done," said House Republican Leader Jim Durkin.

Radogno had this advice for her colleagues:

"I emphasize again the critical, critical nature of doing this, and we have to put aside personalities. We have to prioritize what we want. Nobody gets 100 percent," she said.

Lawmakers have been back in Springfield for a special session as they attempt to hammer out a budget deal before the state enters a third year without a budget.

Governor Bruce Rauner released a statement Thursday regarding Radogno's resignation. He said, "It's been an honor and a privilege to work alongside Leader Radogno these last two years as we continue to try to improve the lives of the people of Illinois. She is a consummate professional and public servant, who has championed fiscal responsibility and human services that help our most vulnerable residents. While she will be sorely missed, Diana and I wish her all the best in her future endeavors."

Durkin also released a statement, saying, "Chris Radogno has been my Senator and Co-Republican Leader for many years. I am fortunate to call her a confidant and friend. Her contributions to her district and the State of Illinois are immeasurable. Chris always stayed above the fray in this very partisan environment. Her constituents and I will miss her valued leadership."

Mayor Rahm Emanuel released a statement, saying, "Leader Radogno has been a committed and courageous public servant who has put the needs of her constituents, and all Illinois residents, ahead of special interests, politics and partisanship. Throughout her five terms in office she has always proven willing to reach across the aisle to find solutions for Illinois' most pressing challenges, and her reasonable, pragmatic, collaborative approach to policy stands as a model for other legislators to follow. As the first female leader of a party in the Illinois legislature, she has served as a role model and paved a path for future generations to follow. I join residents across the state of Illinois in thanking Leader Radogno for her service and wishing her well in her next chapter."
Report a correction or typo
Related topics:
politicsspringfieldillinois budgetgeneral assembly
Copyright © 2022 WLS-TV. All Rights Reserved.
ILLINOIS BUDGET
Moody's upgrades Illinois' bond rating for first time in 20 years
$42.2B state budget proposal moves to Gov. Pritzker's desk
IDES asks for millions more in budget as it plans to reopen offices
Gov. Pritzker gives budget address as partisan battle brews
TOP STORIES
Chicago police coming down hard on retail theft rings
Conjoined twins separated after 10 hour surgery
Retired CPD officer, 57, killed in Edison Park hit-and-run
Weber Grills apologizes for ill-timed meat loaf recipe email
Family of man who died falling off party bus reaches settlement
Ring camera captures fiery I-80 semi crash that injured 2
2 NYPD officers shot, 1 fatally, responding to domestic violence call
Show More
Chicago Weather: Morning flurries, cold Saturday
Maryland man dies with more than 100 venomous snakes in his house
Man who got double lung transplant after COVID survives 2nd case
Laundrie claimed responsibility for Petito's death in notebook: FBI
Man killed in Hampshire explosion ID'd; 1 other critically injured
More TOP STORIES News