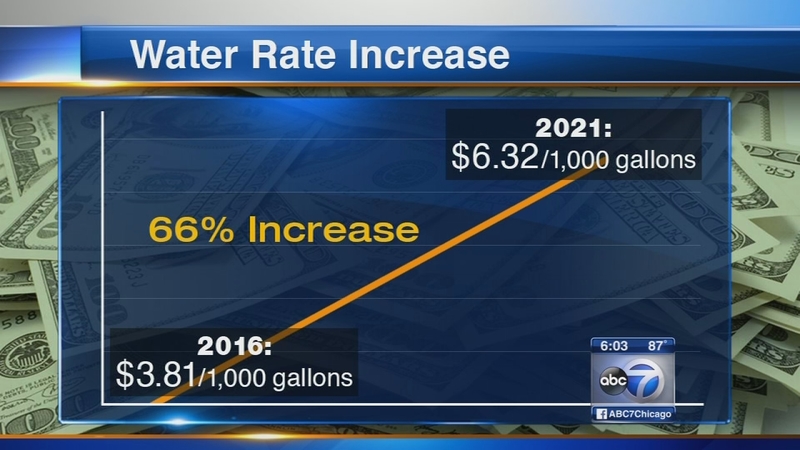 CHICAGO (WLS) -- After getting socked with a big property tax hike, Chicago homeowners may also get hit with huge tax increases for water utilities.

For the second time in four years, the mayor of a city on the largest freshwater source in the world said Chicago homeowners and businesses should pay more to turn on their faucets.

The mayor dropped his bombshell during a speech at the Chicago Investor's Conference. To pay city worker pensions, he wants to tax water usage, raising bills nearly 70 percent.

"Starting at around $4.50 the first year going up seven per cent each year for the next four years," Emanuel said.

Currently, city homeowners pay $3.81 per 1,000 gallons used. With the tax hike, an annual 7 percent increase for the next five years would raise the rate to $6.32 by 2021. The city would use the additional revenue to replenish the city worker pension fund predicted to run out of money by 2025. The mayor also said that under his proposed pension plan, the employee contribution would increase from 8.5 to 11.5 percent.

Small groups of aldermen were briefed on Emanuel's plan before the mayor's speech. They were asked for ideas other than a water use tax.

"We have to, by law, find something to make these pensions whole," said Ald. Anthony Beale (9th Ward).

Last year, aldermen passed a record property tax increase to resolve shortfalls in the police and firefighter pensions and raised the cell phone tax to shore up the laborers' retirement fund. They also tacked on a garbage pickup fee to the aforementioned water bills that were increased sharply in 2012 to rebuild mains and sewers.

Under the mayor's plan, the average Chicago water bill would cost about $200 more each year - a cost he said is affordable.

"I wanted to make sure we did not do property taxes but looked at a different revenue source again that goes consistently with making sure that people can afford it and it did not undermine what we were trying to do economically for the city," Emanuel said.

Another reason Emanuel ruled out another city property tax increase is that the Chicago Public Schools system has been authorized to raise its levy by $250 million and is expected to do so later this month.