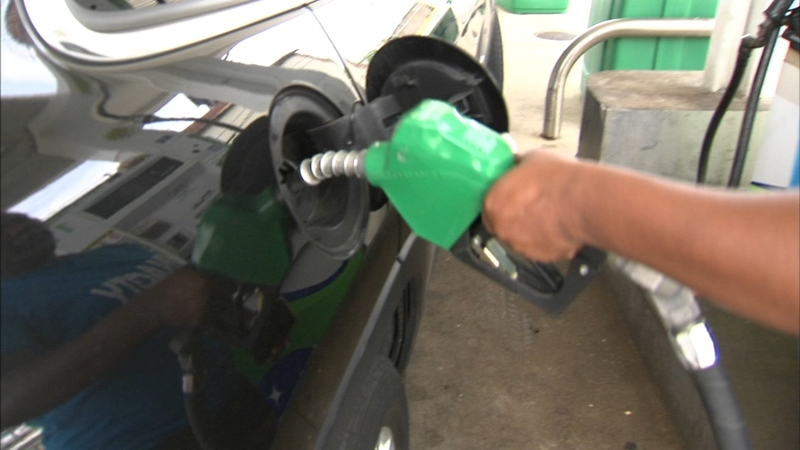 CHICAGO (WLS) -- Governor JB Pritzker signed some new bills into law Friday morning, and one of them will double the gas tax in Illinois.

Starting Monday, the state's $0.19-per-gallon fuel tax will double to $0.38 per-gallon that can be even higher in Cook County.

Governor Pritzker said this is part of a just-signed, $45 billion spending plan to upgrade roads, bridges, parks and university buildings statewide, paid for by revenue from the new gas and cigarette taxes and expanded gambling.

"With this historic $45 billion capital plan, we're fixing decades-long problems, creating good jobs, improving communities for the next generation - and doing it together, across party lines," said Gov. Pritzker. "The Rebuild Illinois plan transforms our state's approach to transportation infrastructure, finally treating our roads, bridges, and railways like 21st century investments and not relics of the past. We're also making critical investments in our higher education institutions, our crime lab and veterans' homes, early childhood centers, and expanding broadband access to communities across Illinois. With these investments, we're creating and supporting hundreds of thousands of new jobs in our state. This is more than an infrastructure plan. This is a job creation plan the likes of which our state has never seen."

Come January, even more increases will take effect, including an increased daily and monthly tax on garage and lot parking, higher license plate fees and higher costs for electric vehicles. The increases are frustrating to residents.

"Maybe I might move," said taxpayer Barbara Jones. "It's getting too expensive to live here in Chicago."

"The fact that we are paying more for something that we are already paying a lot for is like double dipping," said Bobby Deal, another Chicago motorist. "Looks like I'm going to Indiana."

Residents said they will have to change their daily routine just to stay ahead, especially rideshare drivers that have to fill up daily for their jobs.
"It's going to hurt, you're looking at an extra $100 a month basically if you round it out," said rideshare driver Mahalia Evans.

"My profits are going to end up slashed, so, the way I'm gonna combat it is just like I said, head out to Indiana where it's a lot more reasonable and more workable. I'm just going to do that," said rideshare driver Patrick Vital.

While motorists complain, Pritzker reminds them that 1990 was the last time the state gas tax was raised. Transportation infrastructure has crumbled in that time, he says, causing drivers to spend $500-600 per year repairing damage caused by bad roads.

But conservative groups, including the Illinois Policy Institute, don't believe doubling the gas tax is the best way to pay for crumbling infrastructure.

"When you look at sales tax on gasoline as well as all the state and local taxes and fees, this will move us to about the 10th highest in the nation to at least no. 3," said Adam Schuster, with the Illinois Policy Institute.

Ideas Illinois, an organization for jobs growth and prosperity say their recent survey shows voters are not happy.

"A poll that was just released shows that support for the blank check amendment is falling rapidly so we are working to educate voters on that issue to make sure people know by 2020 they can't give Springfield politicians a blank check to their bank account," said Remy Hart of Ideas Illinois.

The American Lung Association has praised the governor and state lawmakers for raising the tax on cigarettes and e-cigarettes.

"Tobacco taxes are proven to help people quit smoking, and have a direct impact on deterring young people from ever starting to use tobacco," said Kathy Drea from the American Lung Association. "We are especially pleased with the tax on e-cigarettes, because every day more young people are becoming addicted to these deadly products. The increase in tobacco taxes is a great step forward, but there is still more that needs to be done to prevent teen tobacco use."
Report a correction or typo
Related topics:
politicsillinoisjb pritzkergas pricestaxesconstruction
Copyright © 2021 WLS-TV. All Rights Reserved.
More Videos
From CNN Newsource affiliates
TOP STORIES