Illinois Republicans stunned after Gov. Rauner admits to recruiting 4 others to run in November gubernatorial race 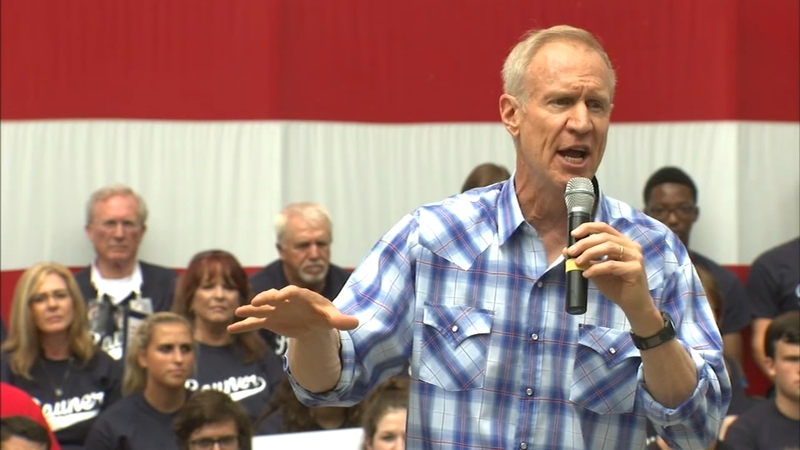 CHICAGO (WLS) -- Gov. Bruce Rauner caused a firestorm within the Republican Party by admitting Thursday in an exclusive ABC7 interview that he had recruited four people to take his place on the ballot in November.

"And I said, 'I'll step aside, I'll give you huge financial resources, you run for governor, I'll support you. You have as good or better chance to get than me,'" Rauner recalled to ABC7. "All four of them said no."

Cook County Commissioner Sean Morrison, a leading state Republican, is now calling for an emergency meeting of the State Central Committee to address the Rauner revelation, which he and others are calling a deeply troubling matter.

In an ABC7 interview, Gov. Bruce Rauner admitted to recruting four other people to replace him in the race for governor in the November election.

In a statement, he said: "I personally asked the Governor on two separate occasions before the Primary if he was committed to his re-election. Both times, to my face, he made clear that he was all in - not only for himself but for all statewide candidates...this private surrender by Bruce Rauner shows a lack of loyalty, integrity, and character."

Rauner is being accused of betraying the party.

"Stunned and even more disappointed, I didn't think I could be more disappointed or betrayed because I think that the Governor really betrayed everybody in the party and by extension everyone in the state," said Chris Robling, a Republican strategist.

Sources said that Rauner approached his attorney general candidate Erika Harold the day after the state fair in August, less than three months before the election, and asked her to take his place on the ballot.

"It appears in this case he wasn't really into it and he got more and more out of it the longer the campaign went on," Robling said.

Rauner had also asked then-state Sen. Karen McConnaughay to do the same in April.

McConnaughay said first lady Diana Rauner approached her with a similar request the year before.

ABC7 learned Cubs part-owner Todd Ricketts was also among those who turned down the governor.

The fallout has Republicans frustrated and angry.

"What happened at the top of the ticket brought us down across the whole state, we lost a whole lot of state legislative seats because of what he did and that's what really hurts, because now Madigan has a super majority and we can't stop him," said Chris Cleveland, chairman of the Chicago Republican Party.

The chairman of the state Republican Party Tim Schneider said in a statement that "Neither myself nor the staff at the Illinois Republican Party had any knowledge of the discussions Governor Rauner had regarding his candidacy."

Morrison now wants an emergency meeting of the Republican Party Central Committee in part to make good on programs that he said the governor bailed on, including early voting and absentee ballot initiatives.

"There were commitments made," Morrison said. "If the governor hadn't intended on running, perhaps that's the reason why these programs were not funded, counter to the commitment that they would be."