WLS
By Craig Wall
CHICAGO (WLS) -- Jeanne Ives is defending a controversial ad that has created a firestorm in the March Republican Primary for governor. In the ad, she attacks Governor Bruce Rauner over policy decisions on immigration, abortion and transgender rights.

"I want to know why people are so offended by it? What's so offensive about the ad?" Ives asked Monday during a speech before the Chicago City Club.

Ives, a conservative Republican state representative from Wheaton, said with six weeks before the primary election the ad was needed to quickly demonstrate to voters in a visual way the impact of Rauner's policy decisions, which she says have betrayed the Republican Party.

"What the commercial that is generating the expected hysteria from the expected quarters attempted to do, admittedly, provocatively, was to properly and truthfully characterize the extreme issue positions that Rauner took and their implications," Ives said.

Ives contends the commercial, entitled "Thank You, Bruce Rauner" tackles issues and was not an attempt to attack people.

"As Christians we believe every person is made in God's image and deserving of dignity," Ives said, referencing herself and her husband Paul.

"I respect people who are different than me, I respect people who have different views than me in fact it seems that the converse is not true among many with whom I disagree. They shouldn't be silenced but neither should I. And I won't be," Ives said, drawing applause from the audience at attending the City Club luncheon.

Rauner characterized it this way: "It is shameful, it is ugly, it is hurtful, there's really no place for those sentiments in our society."

Dan Proft, a radio host and conservative strategist who used to work with the Rauner campaign but defected to Ives, defended the ad.

"Not everybody's tone or sensibility is the same, so people are going to take things differently. But in terms of the veracity of the statements in the ad and the representations, the characterizations of issues and issue positions the governor has taken, that's all factual," Proft said.

The ad, which used actors, came under particular fire for a transgender person thanking Rauner for a trans-rights bill. Ives made no apologies.

"Rauner chose the political agenda of the LGBTQ movement over the privacy interests of moms and dads who don't want their daughters forced to be in the same bathrooms and locker rooms as men," Ives said.

The head of the Illinois Republican Party said Ives should take the ad down.

"Reasonable people can disagree on policy issues, but when it goes to the point of mocking and denigrating the people of Illinois, that's just wrong," said Tim Schneider, the party chairman.

Ives' campaign said the ads, and another positive image piece, which aired during the Super Bowl will be on the air through Friday. More ads are in the works.
Report a correction or typo
Related topics:
politicschicagoloopbruce raunergovernorillinois
Copyright © 2020 WLS-TV. All Rights Reserved.
RELATED Ill. GOP chairman calls for Ives to take controversial ad off the air 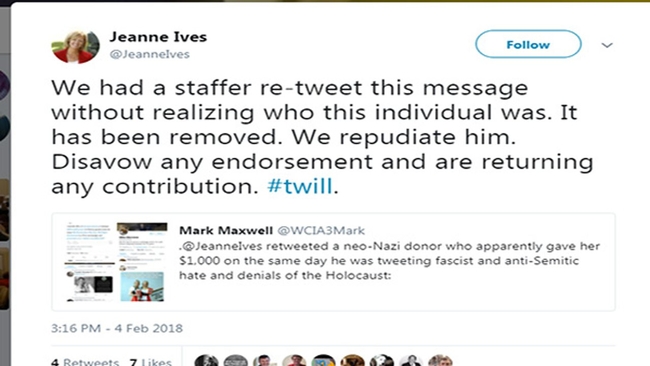