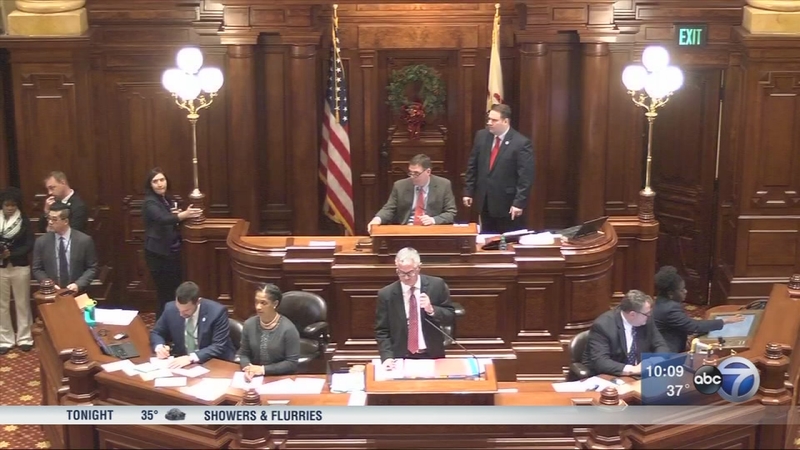 SPRINGFIELD, Ill. (WLS) -- The state budget crisis bubbled over in Springfield Thursday as the governor vetoed funding of the Chicago teacher pension fund.

Then a short time later, the Democratic majority in the State Senate voted to override the governor's veto. A vote has not yet taken place in the State House, which has adjourned until January 9. To override the veto before then, Speaker Mike Madigan would have to call a special session.

It was a stunning setback for Chicago Public School officials, who had thought for months their budget crisis had been resolved for this year.

As Senate President John Cullerton left the mid-morning leaders' meeting in Governor Bruce Rauner's office, he insisted there had no deal to link the CPS grant to a larger pension reform agreement.

"We haven't talked about putting two things together at this point in time," Cullerton said.

Minutes after the session, the governor vetoed the $215 million appropriation writing, "Breaking our agreement undermines our effort to end the budget impasse and enact reforms with bipartisan support."

Not getting the money to help pay the cost of teacher pensions will leave the CPS budget approved last summer with a $215 million shortfall, endangering teacher job and district programs during the current academic year.

Claypool said that CPS would continue to fight the veto on multiple fronts.

Mayor Rahm Emanuel who is attending a conference on climate change in Mexico, released a statement Thursday calling Rauner's veto, "reckless and irresponsible."

"This action is both reckless and irresponsible, and make no mistake, it's our children who will pay the price. The governor is lashing out, imperiling the system-wide gains earned by Chicago students and teachers, and proving just the latest example of his willingness to put the burden of his failures on the backs of the state's most vulnerable citizens, whether it's schoolchildren, college students, seniors, or those living with disabilities. This is no way to run a state," Emanuel said.

"If you just give the city of Chicago, CPS, $215 million, with no pension reform, you don't solve any problems," McSweeney said.

Democratic House Speaker Michael Madigan is trying to round up 71 votes in order override the governor's veto.

The Chicago Teachers Union released a statement saying that it was not surprised Rauner vetoed the bill.

"This was his plan all along. His stopgap budget was nothing but political cover in an election year, and he refuses to pass a balanced, long-term budget or seek additional revenue for Illinois because the state legislature will not agree to his plans to destroy collective bargaining and rescind retirement security," CTU said. You can read their full statement below Rauner's statement.

"Today I return Senate Bill 2822, which would give $215,000,000 to Chicago Public Schools without having reached agreement on comprehensive pension reforms for the State and local governments.

In June we agreed on a six-month funding bridge to a balanced budget with structural and economic reforms. Democrat leaders were clear at that time that an agreement to end the budget impasse was not possible before the election. Although disappointed, we came together to fund schools and critical government operations until legislative leaders were willing to reengage in serious, good faith negotiations.

As a precondition to funding schools statewide, Democrats proposed a $700 million State bailout of CPS. We eventually agreed to provide CPS with $215,000,000 - the estimated amount of its Fiscal Year 2017 employer normal pension cost - but only if we came together to pass comprehensive pension reform. Without reforms to solve our structural problems, taxpayer money would continue to be wasted on bailout after bailout.

The agreement was clear: Republicans supported Senate Bill 2822 only on condition that Democrats reengage in serious, good faith negotiations; and President Cullerton and Leader Radogno filed motions to reconsider the bill, which would keep the bill in the General Assembly until a pension reform agreement was reached.
The election is over. Despite my repeated request for daily negotiations and hope to reach a comprehensive agreement by the end of next week, we are no closer to ending the impasse or enacting pension reform. Still, President Cullerton withdrew his motion to reconsider the bill, ruled that Leader Radogno's motion was inapplicable, and presented the bill to me for approval or veto - forcing me to take action. Then today, President Cullerton suddenly denied that the leaders had agreed that this bill would depend upon first enacting comprehensive pension reform. Breaking our agreement undermines our effort to end the budget impasse and enact reforms with bipartisan support.

The taxpayers of Illinois want a balanced budget. That can only be done if we address the structural imbalances that have bankrupted the State and CPS alike and drain resources that should be spent on other priorities, like improving schools and funding social services. The taxpayers of Illinois do not want just another bailout. Let's get back to work to end the budget impasse and put Illinois on the right track once and for all.

Therefore, pursuant to Section 9(b) of Article IV of the Illinois Constitution of 1970, I hereby return Senate Bill 2822 entitled "AN ACT concerning public employee benefits", with the foregoing objections, vetoed in its entirety."

"Based on his record of inaction and neglect thus far, it is no surprise that the governor vetoed a bill that would have provided much-needed funding for Chicago's public schools. This was his plan all along. His stopgap budget was nothing but political cover in an election year, and he refuses to pass a balanced, long-term budget or seek additional revenue for Illinois because the state legislature will not agree to his plans to destroy collective bargaining and rescind retirement security.

"We cannot fund education in Illinois without additional revenue and an equitable distribution of that revenue to our school districts, and by attaching SB 2822 to his turnaround schemes, the governor continues to jeopardize the education of thousands of children who depend on the state for assistance.
"Chicago's public schools have suffered from irreparable cuts, including cuts to essential special education funding. Today's veto should be a wake-up call to Mayor Rahm Emanuel to denounce the governor and use his influence with the financial sector to make good on promises to fund our schools. It is unacceptable for both the governor and the mayor to allow our district to languish at such a great cost to our communities and the services and institutions they depend on.

"The Chicago Teachers Union renews our call for the Revenue Recovery Package we introduced in May, because it is clear that the governor will continue to be an enemy of public education, refusing to secure additional revenue and holding children hostage statewide until he gets his unworkable and widely panned turnaround 'agenda' passed."