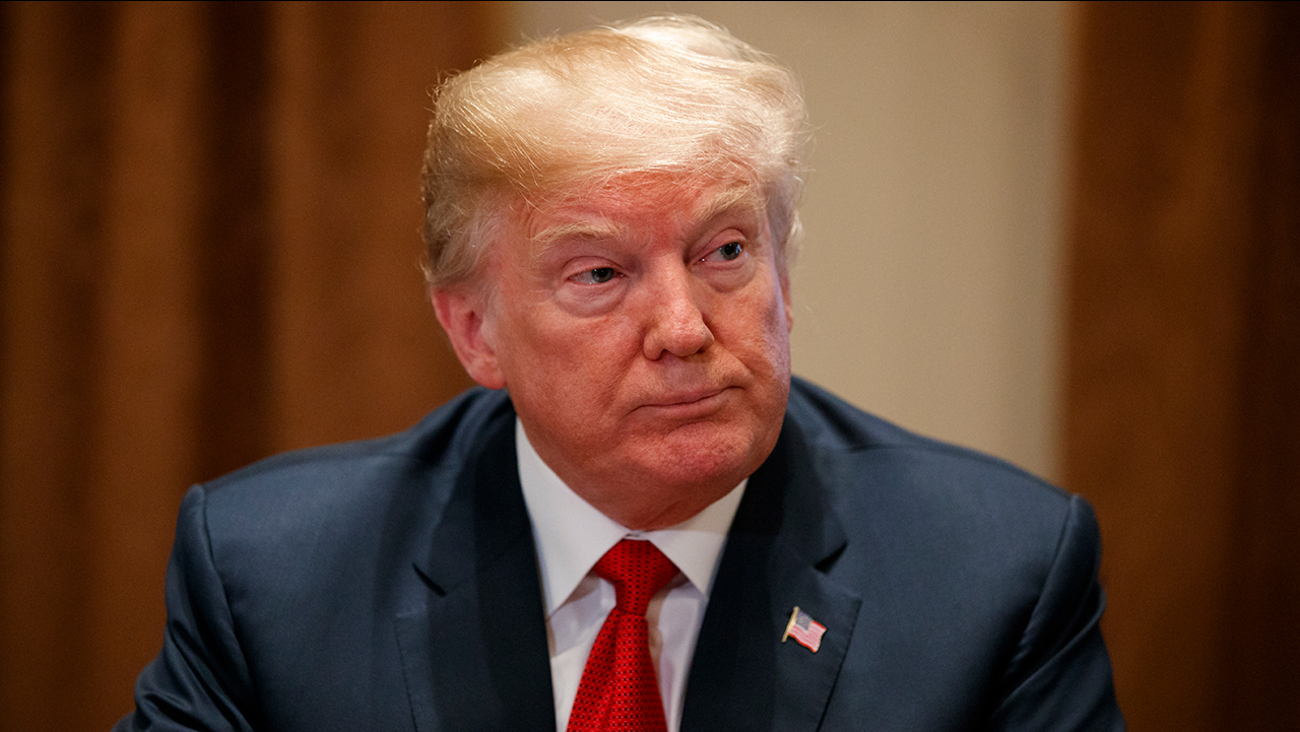 President Trump during a meeting with law enforcement officials on the MS-13 street gang and border security, in the White House, Tuesday, Feb. 6, 2018. (AP Photo/Evan Vucci)

White House counsel Don McGahn said in a letter to the committee that the memo contains "numerous properly classified and especially sensitive passages" and asked the intelligence panel to revise the memo with the help of the Justice Department. He said Trump is still "inclined" to release the memo in the interest of transparency if revisions are made.

The president's rejection of the Democratic memo is in contrast to his enthusiastic embrace of releasing the Republican document, which he pledged before reading to make public. The president declassified the document last week, allowing its publication in full over the objections of the Justice Department.

The top Democrat on the intelligence panel, California Rep. Adam Schiff, criticized Trump for treating the two documents differently, saying the president is now seeking revisions by the same committee that produced the original Republican memo. Still, Schiff said, Democrats "look forward to conferring with the agencies to determine how we can properly inform the American people about the misleading attack on law enforcement by the GOP and address any concerns over sources and methods."

Trump has said the GOP memo "vindicates" him in the ongoing Russia investigation led by special counsel Robert Mueller. But congressional Democrats and Republicans, including House Speaker Paul Ryan and Rep. Trey Gowdy of South Carolina, who helped draft the GOP memo, have said it shouldn't be used to undermine the special counsel.

The president had until Saturday to decide whether to allow the classified material to become public after the House intelligence committee voted Monday to release it. Republicans backed releasing the memo in committee with a unanimous vote, but several said they thought it should be redacted. Ryan also said he thought the Democratic document should be released.

In declining to declassify the document, the White House also sent lawmakers a letter signed by Deputy Attorney General Rod Rosenstein and Wray, as well as a marked-up copy of the memo, laying out portions it considers too sensitive to make public. Among those passages are some that the Justice Departments says could compromise intelligence sources and methods, ongoing investigations and national security if disclosed.

Democrats who wrote the memo say it disputes many claims in the GOP memo, which accused the FBI and Justice Department of abusing their surveillance powers in obtaining a secret warrant to monitor former Trump campaign foreign policy adviser Carter Page.

The White House message caps off a week in which Republicans and Democrats on the committee have publicly fought, with the panel now erecting a wall to separate feuding Republican and Democratic staffers who had long sat side by side.

The disagreements have escalated over the last year as Democrats have charged that Republicans aren't taking the panel's investigation into Russian election meddling seriously enough. They say the GOP memo, led by chairman Devin Nunes, R-Calif., is designed as a distraction from the probe, which is looking into whether Trump's campaign was in any way connected to the Russian interference.

Trump declassified the GOP-authored memo over the objections of the FBI, which said it had "grave concerns" about the document's accuracy.

In the Nunes' memo, Republicans took aim at the FBI and the Justice Department over the use of information from former British spy Christopher Steele in obtaining a warrant to monitor Page under the Foreign Intelligence Surveillance Act, or FISA. The main allegation was that the FBI and Justice Department didn't tell the court enough about Steele's anti-Trump bias or that his work was funded in part by Hillary Clinton's campaign and the Democratic National Committee.

They argued that the reliance on Steele's material amounted to an improper politicization of the government's surveillance powers.

Democrats have countered that the GOP memo was inaccurate and a misleading collection of "cherry-picked" details.

They noted that federal law enforcement officials had informed the court about the political origins of Steele's work and that some of the former spy's information was corroborated by the FBI. They also noted that there was other evidence presented to the court besides Steele's information, though they have not provided details.

The Democratic memo is expected to elaborate on these points.

House Republicans who have seen the document had said portions will almost certainly have to be redacted to protect intelligence sources and methods. Earlier this week, White House officials said the Democratic memo would go through the same national security and legal review as the Republican document. But White House chief of staff John Kelly hinted at possible redactions, saying the Democratic version is "not as clean" as the GOP's.

Rep. Adam Schiff of California, the ranking Democrat on the House intelligence committee, has said he will be scrutinizing the process closely. His office did not have immediate comment Friday on the White House message.
Report a correction or typo
Related topics:
politicsdonald trumprepublicansrussiademocratsu.s. & world
Copyright © 2021 by The Associated Press. All Rights Reserved.
More Videos
From CNN Newsource affiliates
TOP STORIES