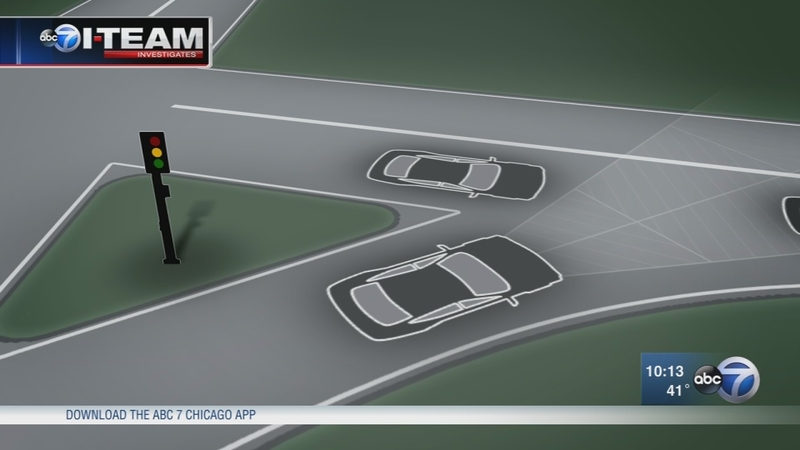 Viewers alerted the I-Team about several intersections after the I-Team exposed what angry drivers called a red light camera trap in Crestwood. The village disagreed, saying the intersection was clear.

Now drivers are fighting in court in other suburbs.

All the intersections have a designated right hand curve turn lane. There's also an island to the left with a traffic light. Many drivers the I-Team talked to said once they pass the island to look for traffic they can no longer can see a light in front of them, so they don't know if it's red, yellow or green.

Other people said the designated right lanes suggest they can just keep going.

"So it's confusing. So it feels more like a fundraiser," said Joy Patterson about the subsequent red light tickets.

"You feel like you are going into the expressway right there 'cause it turns off," said Ethal Smith of Rolling Meadows.

In Rolling Meadows, drivers are fighting tickets from the intersection on Algonquin Road going right in a designated lane which spills into the Route 53 Expressway.

"It is a trap and it is bogus," said safety Timothy Galarnyk.

Galarnyk specializes in federal traffic guidelines. He analyzed the Rolling Meadows intersection, as well as on in Addison at John F. Kennedy Drive and Lake Street. Galarnyk told the I-Team that both intersections are traps.

"This is a right turn on red trap," he said.

Galarnyk said he believes once the red light cameras is added, it violated federal guidelines in the Manual on Uniform Traffic Control Devices.

"Where is the red? There is a bunch of sky here," he said at one intersection.

He said that's because authorities are asking drivers to follow traffic light rules in a designated lane, but said those lights are outside of their cone of vision.

"One hundred-eighty degrees from the site of the motorist this way. This is where the driver is going to pay attention," he said. "And you say, well, there is no control over here, this is fine, they just keep going like that car did-they keep driving."

There is another light across the street at both intersections, but Galarnyk said those are meant for straight through traffic.

"They are telling the driver we expect you are going to look over here," he said, dramatically moving his head. "That is garbage, that is silliness." 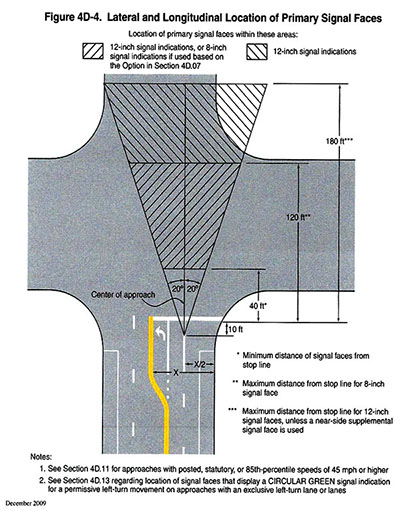 Galarnyk said similar curves in Rolling Meadows, Addison and elsewhere lace traffic signals or stop signs to the right, or within the cone of vision.

The adjudicator for Rolling Meadows said she bases her judgements on each individual case.

"I can tell you that people have argued before that there is something preventing them from seeing the signal that is governing that intersection whether it's a semi-truck in a double turn lane or whether it's their vision," said Stephanie Posey.

In an email, the Rolling Meadows police chief said the lights are clearly visible. He then cited a 46 percent reduction in crashes in since cameras were placed at the intersection three years ago.

At the Addison intersection, Deputy Chief Brian Goss pointed out this sign that says you can turn after stopping.

Jason Knowles: If you're not stopping at the line and you have to pull up to see if there's traffic, you don't know what color the light is.
Deputy Chief Brian Gross: They can look at the other light right up here.
JK: The one across the street?
BG: Yeah across the way, up to their vison up to the left with the red light photo sign.
JK: But if there was a traffic light or stop sign right here, in people's faces, wouldn't that help?
BG: It could, absolutely.

BG: I mean we could do that or I'm sure the public could also.
JK: Would the police or the village do that?
BG: We would consider it.

The I-Team also found three questionable curves all at one intersection on Lincoln Highway and Governors Highway. When they showed it to Galarynk on Facetime, he said, "That's a scam, that's bogus."

One of those right hand turn lanes is in Olympia Fields; the other two are in Matteson, where people were lined up at court to contest their tickets.

"I am [against red light cameras all together] because I think that they are a racket to raise additional revenue," McSweeney said.

He is also questioning how IDOT approves the cameras to be placed at intersections.

"There is inadequate monitoring being done right now by the Illinois Department of Transportation," he said. "But the situation in Crestwood and the situation in other areas where it's blatantly unfair. I think those are set up purposely to raise additional revenue."

IDOT said it believe the locations in question are compliant with federal guidelines, and that its responsibility is not to monitor current cameras but only to make sure they are legally installed without creating a safety issue.

HOW MUCH ARE SUBURBS MAKING ON RED LIGHT CAMERAS?

- Rolling Meadows doesn't break figures down by intersection but told the I-Team it generated $1 million from eight cameras in 2017.

- Addison said it made almost $358,000 from its two cameras at the one intersection which has that designated turn lane in question.

- Several cameras at two Matteson intersections have generated about $2.3 million in 2017