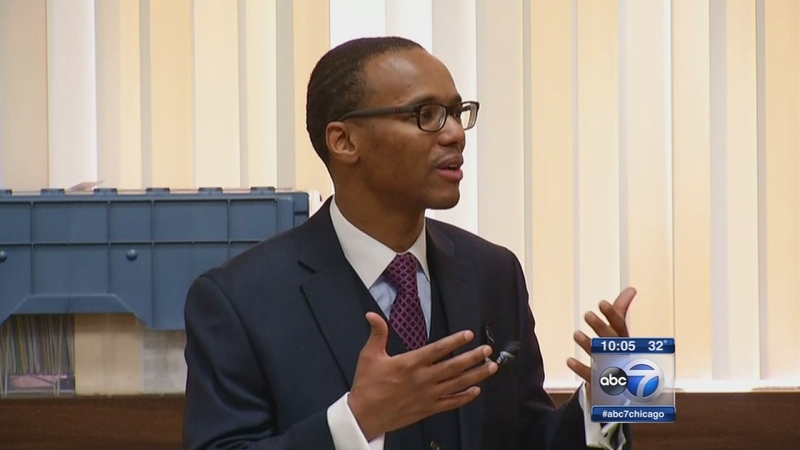 CHICAGO (WLS) -- Convicted killer Reginald Potts spoke out in his own defense for the first time Friday during his sentencing hearing in the 2007 death of ex-girlfriend Nailah Franklin.

Potts, 39, is facing life in prison for killing the pharmaceutical rep.

Potts did not testify during his murder trial, but he had plenty to say Friday, speaking for about 40 minutes. All week prosecutors have portrayed Potts as a cunning manipulator who grows angry and violent when his lies are uncovered. But Potts today said he's the victim of a narrative that's untrue.

"I did not stalk Nailah. I did not murder Nailah. Period," Potts said.

Potts was convicted in November. Prosecutors say Potts killed Franklin after she broke up with him. But Potts denied that Franklin was his girlfriend.

"I did not have any anger toward Nailah Franklin. I was not angry with her. I was not stalking her," Potts said.

During the five-day sentencing hearing, prosecutors called multiple witnesses who detailed a pattern of crime and violence by Potts directed at women and members of law enforcement.

"I am a very outspoken person. You've probably heard that. Your deputies have heard that. I speak my mind. I'm not a violent person," Potts said.

Potts grew emotional after speaking of his upbringing, growing up in a broken home but surrounded by loving family, at one point referencing Thursday's impact statement given by Franklin's mother.

"Having a mother and hearing Ms. Franklin's mother speak about the effect that her daughter's death had upon her, that more than anything throughout the sentencing hearing and throughout this trial moved me," Potts said.

But Potts also told the judge on Friday that he did not stalk the victim, but that he asked Franklin to stop calling him. Potts told the court that Franklin also called the mother of his children and told her Potts wanted to have a child with Franklin.

Potts also defended his record of infractions while in jail. He argued that he was targeted by guards over the last eight years because he would not accept poor treatment as other inmates do.

Potts also argued that his children's mother Natalie Figueroa was not a battered woman, but that he left her after she cheated on him while he was in prison. He said another woman who testified against him, Ina Dorsey, was angry because he dated her but never told her he was married.

Potts did admit to kicking a door in while frustrated about being able to visit his children. Potts then read an email from Dorsey and asked the judge, "Does this sound like a battered woman?"

Potts also said he blamed the media for the "narrative" of him stalking Franklin.

"I liked the way my life was going. I would not have thrown that away," Potts said. "I stand before you, and I say that I am innocent.

"This court is bound to impose a sentence, but I am not going to be in someone's jail rotting away," he said. "And wait until a court of review looks at this case and possibly make a different decision."

"I ask again that it is out of compassion and mercy," Potts said of the sentence. "I can't ask for forgiveness for something I didn't do."

Thursday's testimony ended with Potts' father, who painted a portrait of a kid from a broken home who grew up to be an intelligent father of two girls who he loves very much. His testimony was in response to some dramatic victim-impact statements.

"Nightmares still taunt me with her screaming, moaning and reaching out, begging for her life. But none of us were there to save her. None of were there to hear her cries," said Ashlee Allen, Franklin's sister.

"There were two deaths, Nailah and her father. He died as a result of this. He stopped eating and his health declined," said Maria Maner, Franklin's mother.

The court also heard from two state's attorney investigators who detailed a pattern of violence by Potts against women.

Richard Lombard testified that one of Potts' former girlfriends told him Potts choked her during a stay in a New York City hotel.

"He choked her, choked her out, and threw her on the bed. She was able to call hotel security and he fled," said Lombard.

Potts was convicted in Franklin's 2007 murder. The 28-year-old pharmaceutical rep was asphyxiated after breaking up with Potts.

Cook County Jail Chief Tarry Williams testified that Potts has committed more than 200 violations while in custody, including setting a fire in his cell and sabotaging plumbing.

He was asked where Potts ranked among worst inmates.

The hearing was delayed because of some questions regarding a cell phone that was found in some documents that Potts gave his attorneys earlier this week. Potts said the phone wasn't his.