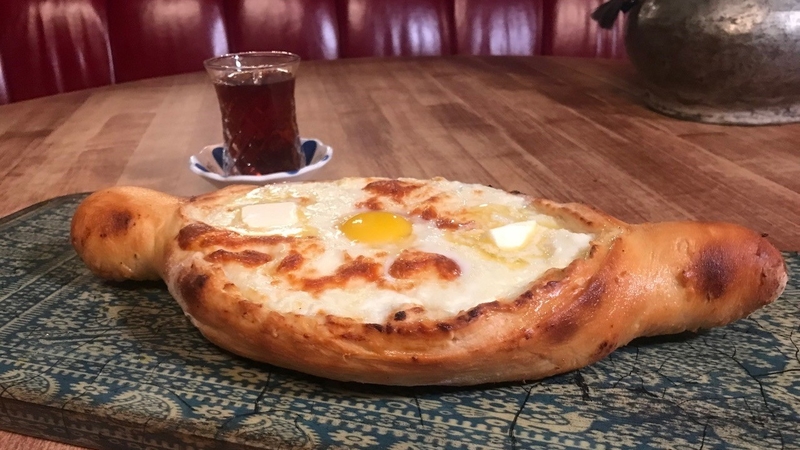 CHICAGO (WLS) -- Baked dough and melted cheese are pretty elemental, and in Chicago, we typically see them in pizza. But they can also form the basis of a classic dish with roots in Turkey and Georgia, near the Black Sea.
The Hungry Hound says this dish - khachapuri - is made from scratch every day inside an Andersonville restaurant, where the menu is full of Georgian and Turkish specialties.

I first had khachapuri at a Georgian bakery on Devon Avenue years ago, long since closed. But was pleasantly surprised to see it again in Andersonville. It seems pretty basic, but when you consider the dough is made from scratch and multiple cheeses have to be imported from Georgia and Europe, the payoff is delicious.

The restaurant's name is Oda Mediterranean, but don't let that generalization fool you. Much of the menu focuses on Georgian cuisine.

"On the map you can see it's kind of sandwiched between Turkey and Russia," said Marina Cardak, the owner.

Their pride and joy? Khachapuri.

"It comes from the southern part of Georgia, from the Black Sea shore. The name khachapuri in translation from Georgian, 'khacha' means cheese curd and 'puri' means bread," she said.

So she begins by making the dough, rolling it out into an oval shape. It's yeast, flour, salt...

"Little bit of sugar, and for softness we add some milk," she said.

She covers the middle of the oval with an imported, soft crumbly cheese called Imeruli.

"It's kind of something between feta and queso fresco," she said.

Cardak then folds up the sides, pinching them together in the middle, sealing in the cheese. But she's not done. The khachapuri is turned upside down, and she makes a slit right down the middle, then spreads the dough out - mostly from the middle - then adds more Imeruli - leaving a pair of doughy handles on either side. She then cuts up a second type of cheese, this one creamier, firmer and richer.

"It's called Sulguni - it's similar to part-skim mozzarella."

Into the oven, where it's baked on a stone deck for about 10 minutes, at which point an egg is added to the middle, where it bakes until set. Once the dough turns golden and the egg is cooked, the outer edges are brushed with a bit of olive oil to add a bright sheen, and to gild the lily, a couple pats of butter are added, just before whisking it out to the table.

Served hot, don't spend too much time taking pictures, because you've got to mix up the cheese, egg and butter, then get ready to tear and dip.

"You have to rip off the bread and dip it into the cheese. It's good to share with people but in Georgia nobody shares khachapuri it's like a personal. You have to eat it as soon as it comes from the oven, it's the best," she said.

Sharing is recommended because if you eat one yourself, you're going to need to take a nap afterward. By the way, another great dish worth trying is the lahmacun - a sort of Turkish flatbread you can easily eat yourself. Lots of great dishes from both Turkey and Georgia on their menu.