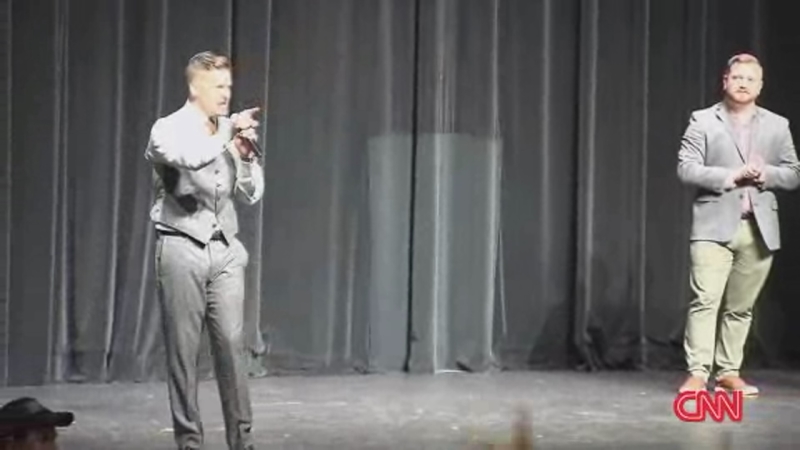 GAINESVILLE, Fla. -- As white supremacist leader Richard Spencer prepared to take the stage at the University of Florida, a concert of bells rang through campus leaving a poignant message of unity.

Laura Ellis, a music professor at the university, went up 11 flights of stairs in the school's carillon tower on Thursday to play "Lift Every Voice and Sing," also known as the black national anthem.

"I think it was an appropriate time to play this song, to show our support for those who need it the most," Ellis told CNN.

"Lift Every Voice and Sing" was first written as a poem in 1900 by James Weldon Johnson as part of a celebration of Abraham Lincoln's birthday at the all-black Stanton School in Jacksonville, Florida.

The song was later adopted by the NAACP as its official song in 1919. It became a staple during the civil rights movement and remains a musical tradition in social, political and religious events in the African-American community.

Ellis and her students play the carillon -- an instrument that consists in a series of tuned bells that are connected to a keyboard -- in the iconic university tower. Twice a day, they perform three songs as hundreds of students walk between classes.

On Thursday, the sound of bells echoed through campus, as police officers in riot gear, Spencer's supporters and anti-Spencer protesters carrying signs against fascism, neo-Nazis and white supremacy flooded the school.

"I think the UF students really unified against hate and presented an image of love that overwhelmed any negativity. I think it was super important and fitting to play that song today, and it left me feeling comforted and unified," said Elizabeth Parker, one Ellis' students.

University and local officials had been concerned that Spencer's appearance could prompt violence. Florida Governor Rick Scott had declared a state of emergency for Alachua County, where the university is located, to avoid bureaucratic delays if multiple law enforcement agencies were to be called to the university.

But Ellis said she felt very safe even when more than 2,500 demonstrators were walking through campus on Thursday.

For the most part, demonstrations remained peaceful. A handful of people suffered minor injuries and only two people were arrested.

"I am very proud of what we saw today, there was a lot of unity. The city and campus security did an amazing job to keep everything organized, clean and peaceful," Ellis said.

Protesters greeted the white supremacist with loud boos and chants of "Go home Spencer" during his speech Thursday afternoon.

The talk was Spencer's first planned speech on a college campus since he and others participated in the "Unite the Right" rally in Charlottesville, Virginia, in August.

With an intensive police presence, protesters chanted, "We don't want your Nazi hate" and "Nazi scum off our streets." The anti-Spencer protesters, who vastly outnumbered the supporters, carried signs against fascism, neo-Nazis and white supremacy.

Spencer took the stage at the Phillips Center at just after 2:45 p.m. Those in the venue, many of whom stood with their fists raised, loudly booed and chanted lines like "Go home Spencer" and "Nazis are not welcome here."

"I'm not going home, I will stand here all day if I have to," a combative Spencer told the crowd.

Still, the heckling continued through his time on stage, leading to several moments of frustration from Spencer.

The event thrust the university into the ongoing debate about what constitutes protected speech and the extent of its limits. Spencer is the president of the National Policy Institute, a leader of the "alt-right" movement and a proponent of the white nationalist movement that advocates for a white "awakening" and a white ethno-state.

University and local officials were concerned that the event could become violent, such as what occurred in Charlottesville, and so took considerable steps to prevent that.

On Monday, Gov. Rick Scott declared a state of emergency for Alachua County, where the university is located, to enable law enforcement agencies to work together more efficiently.

University of Florida President W. Kent Fuchs denounced Spencer's white supremacist platform as abhorrent in a letter to students, but said the school could not stop him from renting the Phillips Center for the event.

Fuchs told CNN there would be more police on campus than at any time in the university's history.

Alachua County Sheriff's Office spokesman Chris Sims said the office used the lessons of Charlottesville in planning. The sheriff's office and the Gainesville Police Department had doubled or in some cases tripled their normal staffing levels as of Wednesday morning, Sims said.

Outside the speech venue, law enforcement sectioned off one area for pro-Spencer protesters and another area for anti-Spencer protesters, about 50 yards apart. The university banned an extensive list of items, including torches, masks, weapons and athletic equipment that could be used as a weapon.

The vast majority of people out protesting were opposed to Spencer and his views. Craig Carlisle, from Gainesville, held up a sign saying "No Trump Nazis." He said he had a message for Spencer: "Don't be racist."

Jamie Bell said her grandparents fought against the Nazis in World War II and that she shouldn't have to do the same.

"They both fought in WWII so that we would not have people like this espousing their views and pushing their hatred onto the rest of our society," Bell said. "They fought against a white ethno-state because they knew that it was a slippery slope to the deaths of millions of people throughout the world."

At a Q&A with Spencer, Bell asked him whether he feels responsible for the violence that his words encouraged, such as when police say a man described as a Nazi sympathizer drove into a crowd of counterprotesters in Charlottesville, killing Heather Heyer.

"That was under the name of your movement. How do you not take responsibility for the actions of those people?" she asked.

Spencer responded by saying that what happened to Heyer was "unclear" and that the man arrested for her death was being used as a "scapegoat."

But not everyone at the event opposed Spencer's views.

Colt Fears, a 28-year-old wearing a pin he described as "an S.S. thing," came to Gainesville from Houston to support Spencer. He said he agrees with about 75% of what Spencer says, but said he thinks Spencer sometimes "beats around the bush."

Outside the venue, a man wearing a shirt with swastikas on it was heckled and punched in the face by an unidentified person. Five minor injuries were reported, authorities said.

One man, an armed security guard hired by the media, was arrested for carrying a firearm on campus, the Alachua County Sheriff's Office said. Another man was arrested for resisting an officer without violence, authorities said.

In an interview with CNN on Tuesday, Spencer said he was flattered by the state of emergency declaration, which he said put him on par with "hurricanes and invading armies and zombie apocalypses."

Still, he said he thought the declaration was overkill.

"The fact is, if the police simply do their job, my speech and the whole event will go off wonderfully," Spencer said.

Previous speeches from Spencer on college campuses have sparked protests, including at Texas A&M in December and Alabama's Auburn University in April. He also led a group of supporters carrying torches in May in Charlottesville in a display that critics said evoked images of the Ku Klux Klan.

That rally set the stage for violent protests that erupted in Charlottesville in August between white nationalists and counterprotesters.

Spencer returned to Charlottesville in October with dozens of supporters carrying tiki torches and chanting phrases like "You will not replace us."

"America was, until this last generation, a white country, designed for ourselves and our posterity. It is our creation and our inheritance, and it belongs to us," he said in a speech last November.

A Facebook event called "No Nazis at UF," which said it was a peaceful protest against Spencer, had about 3,000 marked as going to the speech.

Fuchs, the university president, advised students to shun Spencer and to speak against his "message of hate and racism."

"UF has been clear and consistent in its denunciation of all hate speech and racism, and in particular the racist speech and white nationalist values of Mr. Spencer," Fuchs said. "I personally find the doctrine of white supremacy abhorrent and denounce all forms of racism and hate."

By law, the school must pay for the additional costs of security. Given the heightened concerns, the school is providing extra security that exceeds $600,000, Fuchs said.

That cost will essentially be passed on to taxpayers, which Fuchs said was unfair.

"I really don't believe that's fair that the taxpayer is now subsidizing through these kind of events the security and having to subsidize his hate speech," he said.

How we got here

As a public university, Florida is prohibited from stopping the event based on the contents or views of the speech, Fuchs said. The university provided a permit for Spencer to speak, but the event is unaffiliated with the school, and no student groups sponsored the speech or invited Spencer, the university said.

Still, Fuchs did take one positive lesson from what he called Spencer's "anti-American" message.

"The one thing that comes out of this, though, is it is prompting a great discussion around race and religion and the value of diversity of that on a university campus," Fuchs said.