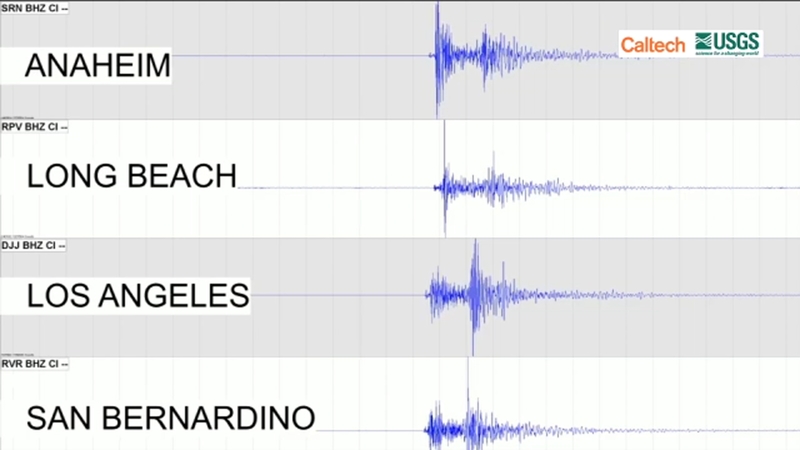 The quake, which was upgraded from a 4.7, was recorded about five miles east-northeast of Ridgecrest around 6:11 a.m., according to the USGS.

The Los Angeles Fire Department said it was in earthquake emergency mode, with helicopters and fire department vehicles patrolling the area to identify any damage. So far, no injuries or damage have been reported.

People in Big Bear, Victorville, Santa Clarita, Palmdale and even some in the ABC7 newsroom in Glendale reported feeling the quake.

"This morning's aftershock was expected, and in the coming days, seismologists expect additional magnitude 4 or larger aftershocks," Caltech said in a written statement.

Palmdale resident Sandra Shields described the rumble she felt through her home.

"The first thing I did was get up and go to my chandelier over the dining room - that's the way I gauge earthquake - and sure enough, it was moving slightly," she said.

Palmdale resident Sandra Shields described the rumble she felt through her home Friday morning after a magnitude-4.9 earthquake struck.

A powerful 7.1 earthquake shook Southern California, cracking buildings, breaking roads and causing power outages on July 5, just one day after a magnitude 6.4 hit the same general area. Seismologists warned at the time that large aftershocks were expected to continue for days, if not weeks. Several aftershocks were felt following Friday's quake.

Remember, we said that the relative number of large magnitude quakes is constant, and more M5s in the sequence would be normal. This morning’s M4.9 is normal and it’s having its own aftershocks https://t.co/Q1FejGJvUI

Nearby Trona was among one of the hardest hit areas during last week's quakes, with crews working to restore sewer lines and running water, and the local library has been set up as a cooling center. A local assistance center and medical center was established Wednesday at the high school in Trona.