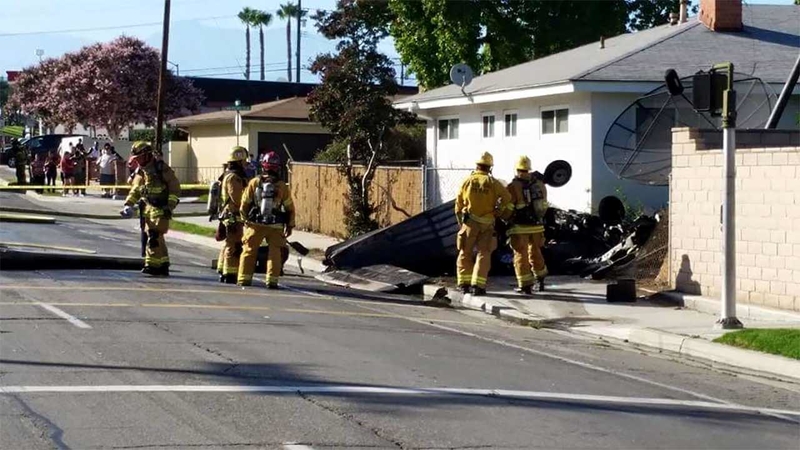 RIVERSIDE, Calif. -- A small plane crashed into a yard of a home near the intersection of Arlington Avenue and Adams Street in Riverside Sunday afternoon, killing the aircraft's pilot.

The pilot of the single-engine Beechcraft BE35 reported a loss of engine power at about 5 p.m. before crashing about a half-mile east of Riverside Municipal Airport, Federal Aviation Administration spokesman Ian Gregor said.

"They were requesting an emergency landing at the Riverside [Municipal] Airport. Shortly thereafter, they received an additional distress call saying that he didn't think that he was going to make it to the airport, and then several calls came in right after that for a plane crash," city fire Capt. Tim Odebralski said.

The plane narrowly missed two houses and landed upside down in Dick and Doris Godfrey's backyard.

"They were having dinner, eating their salad, and they looked up, and all of a sudden they saw smoke and a lot of dust, and then the plane burst into flames," their daughter, Catherine Burke, said.

The pilot was pronounced dead at the scene. He was not immediately identified.

The FAA and the National Transportation Safety Board are investigating the crash, which initially left 350 people in the area without power, according to Riverside Public Utilities.

Power was restored at about 8:50 p.m. Nobody on the ground was injured, Odebralski said.