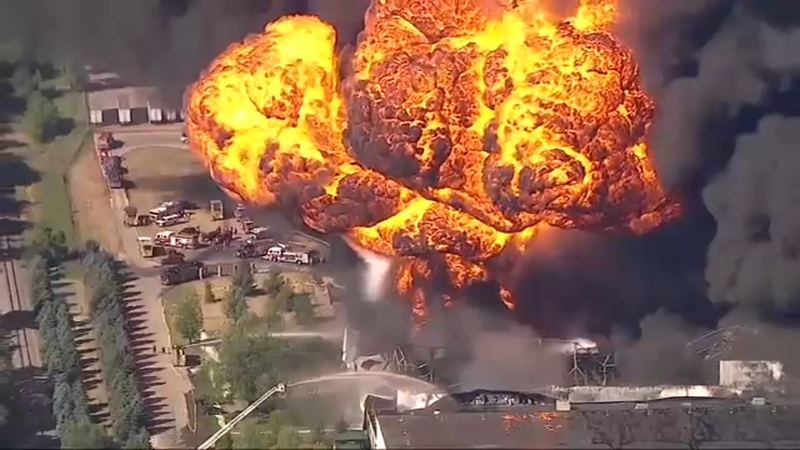 ROCKTON, Ill. (WLS) -- A cataclysmic explosion erupted into the early morning air over rural Northern Illinois, shooting a fireball into the sky.

What they were seeing was the explosion at a Chemtool chemical plant near Rockton, Illinois.

She and her family had little time to think, so they first went to nearby McChesney Park before hightailing it six miles to Roscoe Middle School.

"They said grab your pets, grab your belongings and leave. You need to go," she described, "and as we were doing that, actually fire debris was raining down on us that was lit on fire."

"I have never seen anything like it whatsoever," said Tom Buffum." You see it on TV in the forest fires but not in Rockton!"

That experienced paralleled others who took refuge at the middle school in the next town over.

"I see this huge black cloud when I looked out my window and I'm going, 'Oh my God.' I threw on something to wear and was out the door. I didn't even grab my medications," said evacuee Laurie Oostendorp.

She quickly grabbed her mom and her pets.

"If it wasn't for the school, we would not have had a clue where to go," Oostendorp added. "My house may or may not be safe. It's on the edge of the cemetery which is right on the cusp of that one-mile evacuation. If the wind shifts, my house will not be all right."

Large flames from the chemical plant caused heavy smoke to cover the air in the area. The plant has been burning since 7 a.m. and the smoke continues to go south and southeast.

Firefighters from surrounding towns raced to the scene to help fight the fire. Around 40 to 45 agencies from the northern Illinois and southern Wisconsin area are involved, according to Kirk Wilson, Rockton Fire chief. However, there has been little success in putting the fire out.

"So we had a pretty volatile fire going on at that time and we tried to make an initial attack unfortunately our events failed," Chief Wilson said. "And due to firefighter safety and the safety of all the employees and personnel, we got everybody back."

The huge plume of smoke can be seen from roughly 40 miles away, however, dozens of onlookers came to see it up close.

Amateur Photographer Jason Deckerfirst saw the smoke from his home a couple miles away early in the morning. He captured video from a neighbor's yard as firefighters battled the flames in the early stages.

"It was raining on us. Embers falling on us," he described.

Chemtool makes industrial lubricants, officials said. Everyone from the company has been accounted for, officials added. About 70 employees were evacuated prior to fire officials arriving. No employees were injured, but a firefighter was transported for minor injuries, Wilson said.

Emergency officials said potentially toxic compounds, like lead, nitrogen, and sulfuric acids only fueled the flames, and that drowning the blaze with water simply wasn't an option.

Air quality analysis in the area shows there is no danger to air quality at ground level, Wilson said. For precautionary measures, however, fire officials believed it was best to evacuate the area.

Firefighters said more than a thousand people within a mile of the blaze had to leave their homes immediately because being that close to an unpredictable fire was too risky.

"I think what they were most concerned about it, 'what if this gets out of control quick,'" said Melodie Chamberlain.

"All I can say is that if I woke up and I didn't know where I was at, I would think there is a volcano close by," said one resident.

Now, many of those who had to quickly pick up and leave are left waiting and wondering after having no time to prepare for the sudden evacuation.

The Weils are now staying at a hotel, but not before Max returned to his home about a half-mile from the plant to quickly grab some essentials.

"It was eerily silent. I have heard there's a lot of people that have stayed. But at the same time, they're in their house, buckled down. They're not ready to give up," he said.

"It is catastrophic," said Toni Vanderheyden with Keller-Williams Realty Signature. "So, in a small community, all of us come together and say, 'What can we do to help?' It's our job. It's kind of instinct for you, it is absolutely."

Jason Graciana and his family decided to stay with loved ones.

He captured images of the giant fire and smoke plume as charred debris came raining down on his property.

"I wasn't sure what was going on. Thought we maybe had a thunderstorm," Weild said. "And my wife said, 'Uh, you need to look outside,' and it was just a massive, massive fire."

Officials believe the fire will be a several-day event as the oil-based product burns off, according to Wilson. Fire officials stopped water operations in order to avoid an environmental disaster caused by water streams. They are concerned about product runoff to a nearby river but believe it is best to let the product burn off.

"The strategic plan is to let it burn because it is about 300 m from the Rock River, and the more water we're going to put on it, the more we're worried about runoff into the river causing a problem," said Don Shoevlin, Fire Chief of Harlem Roscoe Fire Protection District.

A mandatory evacuation order is in place for parts of the area, according to the Rockton Police Department.

"I've never seen anything quite like this. I've seen some grass fires out in the Dakotas but nothing like this," an onlooker said. "We were here a few minutes ago, and maybe just three or four, five minutes now, I've lost track of the timing, there was a very loud explosion, and it really caught everybody's attention, kind of like on Fourth of July when they do those big bangs."
EMBED More News Videos

Rockton Fire ordered the mandatory evacuation, and the notice affects all residents and businesses in a one-mile radius of 1165 Prairie Hill Road. Drivers are advised to avoid the area and anyone within three miles is advised to wear a mask while outside to protect themselves from the dangerous smoke, according to Rockton officials.

A source telling ABC7 said several seniors from an evacuated assisted living facility are now staying at the shelter. The Red Cross has prepared the shelter to house hundreds of people, which the agency said it prepared to scale up if needed.

"The first call they asked us can we set up a shelter for 800 individuals. We have the capacity to do that if that's needed," said Leslie Luther, executive director for the American Red Cross of Northern Illinois.

Now, state and federal environmental responders are stationed around the still burning chemical remains, monitoring the air and every slight shift of the dense, lingering smoke.

Chemtool has no compliance violations in the past three years, according to the United States Environmental Protection Agency database.

Large flames engulfed a chemical plant after an explosion in Rockton, Ill.

Another concern, once the fire is contained, will become of the company -- which plays a large part of the local economy.

"It's a big employer," said Rockton Village President John Peterson. "Devastating for a lot of them."

"I am very scared that my house will go on fire, but I know the fire department will protect our community," said Justice Sprague.

"The Salvation Army Emergency Disaster Services ("EDS") staff and volunteers are responding to the Chemtool fire in Rockton. EDS is deploying a mobile feeding unit, as well as a field kitchen and rapid response unit to provide meals, snacks, and hydration to first responders.

Salvation Army EDS staff and volunteers will be prepared to provide Emotional and Spiritual Care to first responders and evacuees as requested. EDS is prepared to assist further, and deploy additional personnel and resources as requested."

Fire crews respond to an extra-alarm fire in Rockton, Illinois.