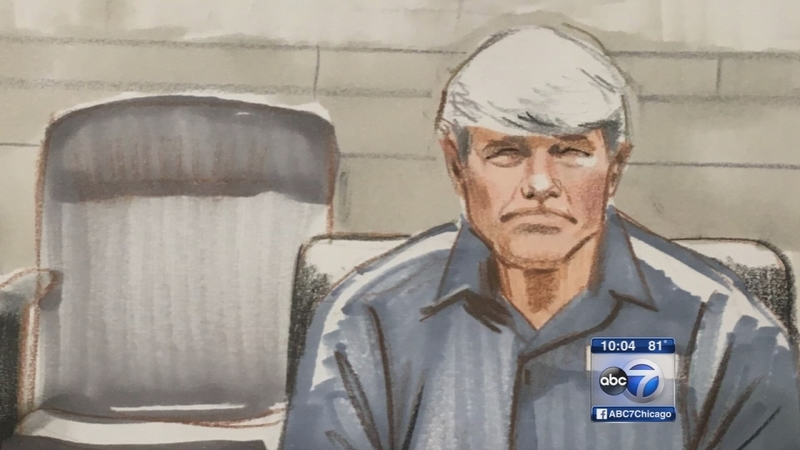 
Zagel convicted the former governor of committing a variety of corrupt acts, including the attempted sale of Barack Obama's Illinois U.S. Senate seat. An appellate court threw out five of the conviction counts against him and ordered that he be resentenced.

Robert Blagojevich, Rod Blagojevich's brother, said he thinks Zagel's decision was wrong. He said perhaps his brother's request of 5 years was too short, but thinks the sentence should have been somewhere in between.

Robert Blagojevich, Rod Blagojevich's brother, spokes to reporters after a judge ruled the ex-governor would serve his original sentence.

"Yeah, I know my brother. He's got a temper and he says stupid things. When the FBI wiretaps you and you've got a prosecution that is out with an agenda, they will use your words and they will twist them and make an argument that fits the vaguest of the 5,000 criminal federal laws - we all don't even know what they are - that he had to defend against. My brother made mistakes. He's taken responsibility and he's paying the price for them.

"He was convicted. He's in prison. He's serving. He's admitted culpability and responsibility. How much can you squeeze out of a turnip? I don't know. He deserves a break," Robert Blagojevich said.

Patti Blagojevich, the former governor's wife, expressed her family's devastation at hearing the Zagel's ruling. Amy and Annie Blagojevich, the couple's daughters, were in tears as their mother spoke.

Patti Blagojevich, the former governor's wife, spoke to the media after the resentencing.

"From our point of view and from the point of view of thousands of people that have reached out to me over the last 4 years, we find his sentence unusually cruel and heartless and unfair," Patti Blagojevich said. "The judge clearly made up his mind before it even started."

Rod Blagojevich made his appearance Tuesday over a video link. He was not at the Dirksen Federal Building in person. In the video, he was dressed in a navy blue prison outfit, sitting in a chair, smiling and fiddling with his hands as he waited for the hearing to begin. The once raven-haired politician had a full head of white hair.

When Zagel walked into the courtroom, Blagojevich grew serious, looked at the camera and listened to what the judge had to say.

Blagojevich addressed the court through the video link Tuesday, apologizing to Zagel and saying he wished he had done things differently.

"I recognize that it was my mistakes and my actions that led me here," Blagojevich said. "I wish I could find a way to turn the clock back and make different choice, but that is not possible. Among the mistakes I made is the way I fought back. Too many battles that have been fought in court I fought in public."

He said being away from his family has given him something to work for.

"It has given me a purpose, to try to do better and make amends for the mistakes of the past and to try to redeem myself," Blagojevich said.

Blagojevich told the court his time in prison has allowed him to "grow his faith." He said he has been compelled to learn patience and become humble while behind bars.

"I think I'm a very different person and I think I'm someone who has learned a lot from the mistakes that I've made," Blagojevich said.
His attorneys tried to make a case for a drastically reduced sentence that would get him out of a Colorado prison within the year.

"The man who stands before you today, although he is 1,000 miles away, he is a different man who stood before you in 2011," said Leonard C. Goodman, Blagojevich's attorney.

Goodman said the court had a legitimate reason to find in 2011 that he was disrespecting the process.

"The arrogance and anger are no longer present in this man," he said.

Goodman said after the appellate court vacated five of Blagojevich's convictions, his fellow inmates were asked to pen letters of support. More than 100 letters were written. Goodman said Blagojevich has been a model inmate, with no disciplinary infractions.

"All of the factors that supported the court's decision on that day support them today. The need for deterrence is equally strong," a prosecutor said Tuesday.

"Although the defendant has apparently found the rewards of service, which is wonderful, he is the same man who appeared in front of you in 2011," she said.

The prosecutor said although Blagojevich apologized for his "mistakes," he has not admitted responsibility.

She said while the inmates' letters show Blagojevich's valuable work and acts of kindness in prison, they do not describe rehabilitation.

"The defendant still has not taken the first necessary step towards rehabilitation - true accepting of responsibility for his crimes," she said.

Patti Blagojevich wrote an emotional letter to the judge Monday night, begging him to let her husband go. She said their children have suffered enough. She also said her husband has been adequately punished.

Patti Blagojevich, her daughters and sister, Ald. Deb Mell (33rd Ward), arrived at the Dirksen Federal Building in Chicago just after 10 a.m. She was not expected to testify Tuesday and did not, but her daughters did.