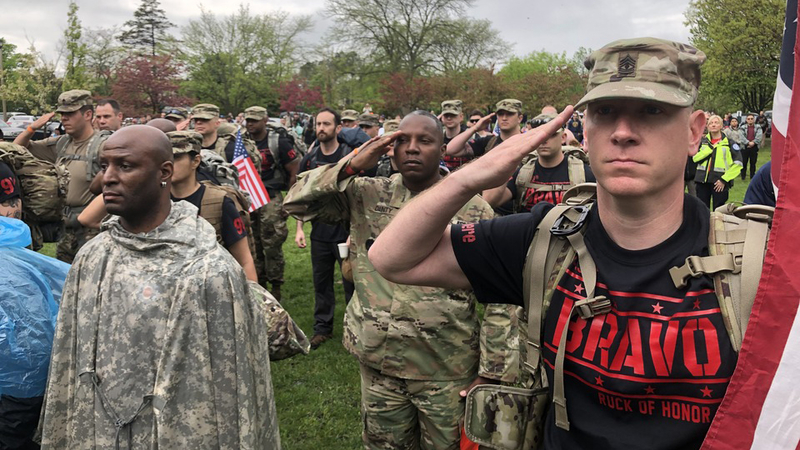 GLENCOE, Ill. (WLS) -- Despite the mud underfoot, veterans, family and friends marched by the dozen Friday on a 20-mile ruck from north suburban Glencoe to North Avenue Beach on Chicago's North Side.

The Chicago Veterans Ruck March is physically trying. It's more than three-fourths the distance of a marathon.

"It's supposed to be a hard, difficult event to complete," said Karen Hernandez, an organizer.

Yet, participants welcomed the challenge at the 6th annual event, because of the cause they were there to support. They're trying to raise awareness to help prevent military veteran suicide.

"Each mile counts for one veteran that commits suicide a day," said Hernandez, referencing a 2018 report from the U.S. Department of Veterans Affairs that found, on average, 20 veterans die by suicide each day.

"A piece of you changes when you come home. You're just not the same," said Scott Ouimet, who spent a year deployed in Baghdad.

Ouimet continues to serve in the Illinois Army National Guard. Throughout his career, he's enjoyed the camraderie, but has also seen fellow veterans struggle.

"I lost a couple friends, real dear friends of mine, to suicide," Ouimet said.

Their memory brought Ouimet and hundreds more, including veterans and ROTC members, to Henry J. Kalk Park in Glencoe.

The "Star Spangled Banner" and "Taps" were played during a ceremony at the park Friday morning. During those powerful moments, with the Stars and Stripes waving overhead, many stood at attention, saluting the American Flag.

It seemed every branch of the military and several generations of veterans joined the event.

For some participants, the march is about more than just suicide prevention. It honors sacrifices made on the battle field and reminds our communities of the struggles that follow veterans home, like post-traumatic stress disorder. The march also sheds light on the challenges homeless veterans face.

Hernandez encouraged people to take some time to honor these Americans on Memorial Day.