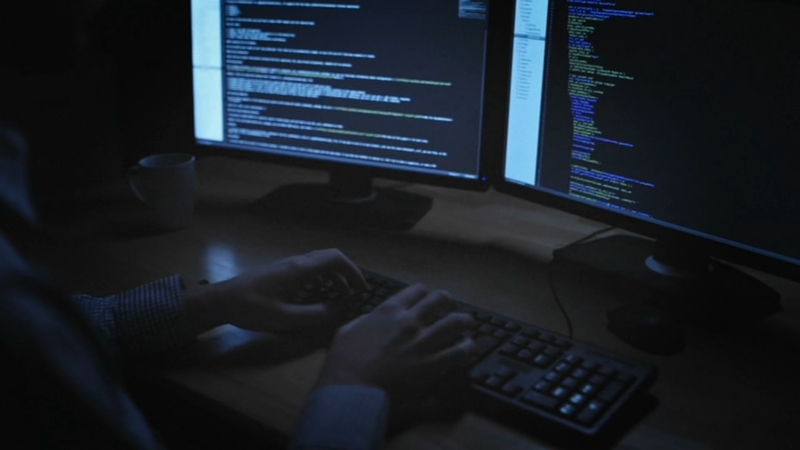 CHICAGO (WLS) -- The first shots fired by Russia in Ukraine didn't come from a missile launcher or even a gun.

They were fired off from a keyboard attached to a computer, according to U.S. and Ukrainian intelligence officials.

In an effort to "soften" the enemy and the battlefield, Russian military commanders targeted Ukrainian banks defense computers for digital attacks.

In Illinois, the ABC7 I-Team has found, preparations are underway to fend off such attacks here-or anywhere. Military officials are preparing a solid defense to keep our lights on, the water safe and voting systems intact.

In a nondescript building at the Illinois Air National Guard base in Springfield, planning and training are underway to detect, respond to and prevent a cyber attack before such an attack can take down critical infrastructure computers that control utilities, electric facilities and water plants for example.

The driveway to the training center and computer facilities in Springfield is lined with fighter jets, a symbol of conventional warfare and what most people think of when they hear of combat.

The digital battlefield isn't necessarily as apparent. But, in 2022 it is a military reality.

"Cyberspace is a warfighting domai,n" said Col. Shawn Strahle, who oversees the cyber security unit for the Illinois National Guard.

The I-Team was invited to see their "joint cyber-range," a brand-new digital warfare training ground.

Just to get inside is a security challenge, with the facility behind keycard entryways and deep in the recesses of a military-drab building.

Similar to how weapons are tested on a firing range, the Illinois National Guard computer networks are housed inside a secure server room that can simulate electronic warfare.

Specially trained members of the cyber unit are run through exercises where they try to defend against hackers.

"You want to keep the adversaries out and you want to protect your your data, protect your ability to communicate to your personnel" said Col. Strahle. "And, and that's the defensive part. And the offensive part is that you you want to exploit weaknesses in your adversary."

This isn't just practice for some imagined threat. Defense experts say foreign actors, most likely from Russia, were behind the massive SolarWinds data breach in 2020 and the shutdown of the Colonial pipeline in May 2021. In 2016, Russian hackers targeted a half million of Illinois' voter registration records.

According to Col. Strahle, "They're trying to get into most critical infrastructure."

On Thursday President Biden put Russia on alert following the Ukraine cyber-invasion that preceded a conventional weapons attack. The president said that if Russia attacks American businesses or other U.S. computer systems, there will be retribution.

Those are the threats that Illinois National Guard members are working to prevent, from pipelines to water treatment plants and the electric grid; and critical infrastructure is target number one.

"If you get down to 30 degrees, take down the power grid-if you were able to in Chicago for a week-how do you get back up and running to make sure the citizens are safe?" asks Col. Strahle. "There's critical infrastructure that's being attacked and so our job as a National Guard is really to look at across those and say, what would happen in our state," Col. Strahle told the I-Team in an interview.

Now, Major General Rich Neely, adjutant General of the National Guard said, a new Intelligence and Electronic Warfare Battalion is scheduled to be constructed in Washington Park on Chicago's South Side.

It is slotted for a huge, 1930's facility named for General Richard Jones-a decorated military leader who served in both World Wars fighting with a then all-Black unit.

During the next five years, the armory will undergo a multi-million dollar upgrade, becoming the Chicago-based headquarters for a new generation of cyber soldiers. They're training to defend here at home or even potentially deploy alongside combat units.

"It could be defensive and could be offensive as well, " Neely said-essentially describing what the Russians did in Ukraine. "You know, to ensure that they're able to jam the enemy and those kind of things on the battlefield" he stated. "We are truly breaking new ground when we talk about cyber operations."

And the Indiana National Guard is also standing up a new electronic warfare battalion as part of a nationwide push from the military to rethink the way conflicts will be fought in the future.

"The individuals and soldiers within this organization will have the skills to actually defend the US when when called upon, in that that new arena or battlespace" said Maj. Grover Smith of the Indiana Army National Guard. "It is the emerging area that we need to be able to defend ourselves against."