Chicago area Ukrainians speak with friends refusing to leave Kyiv: 'This is their motherland'

Local doctors gear up with medical supplies before traveling to Polish-Ukrainian border: 'It's our duty to help'
WLS
By Ravi Baichwal 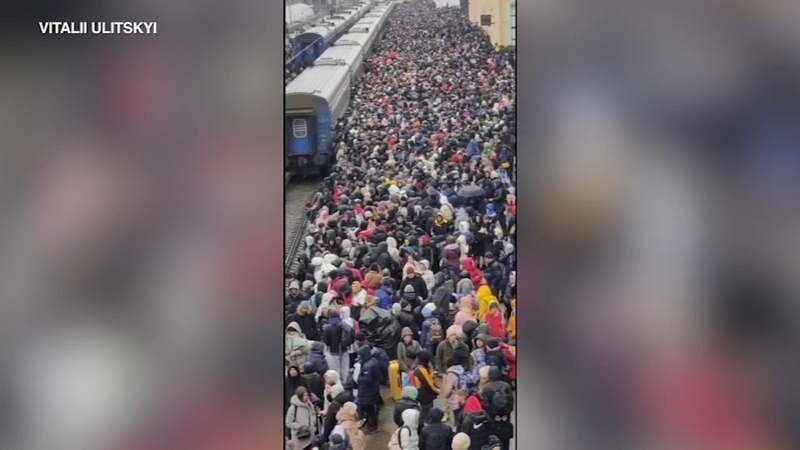 Chicago area Ukrainians speak with friends in Kyiv: 'This is their motherland'

EVANSTON, Ill. (WLS) -- In their artistic Evanston flat, Ruslana Litinskaia and Leon Litinsky, Kyiv natives and American citizens for 30 years, settled in for their part of the war effort.

They have been checking in with family and friends dealing with a situation said, if not so deadly, would be laughingly absurd.

They talked to their best friends, Larissa and Vitalli Ulitskyi, a psychiatrist and businessman in Kyiv who refused to leave.

"They are only afraid that a direct hit will destroy them, but a good part about it, they'll be gone," Litinskaia said.

Larisa and Vitalli said they will head to their basement when they hear bombing, but 12 days in, the sound has to be really loud to move. It's a sardonic take on what has been going on around them. They consider their strength part of the collective will of the Ukrainian people to resist.

"And there is lost children mothers and parents fathers and children are separated and they are asking for humanitarian help," said Ruslana."They have decided to stay because it is their home it is their city their country and they believe that they will win this is their motherland."

Leon's father sketched a picture when his grandparents were murdered in 1941 at Barba Yar, right near where all of these people are from.

"People who they knew start to die, so it's getting closer to home," Leon said.

Ruslana and Leon's family members have been fighting the Russian invasion from all over Ukraine.

"It is very important for us to feel your support your touch and feel your closeness connection," said Vitalli.