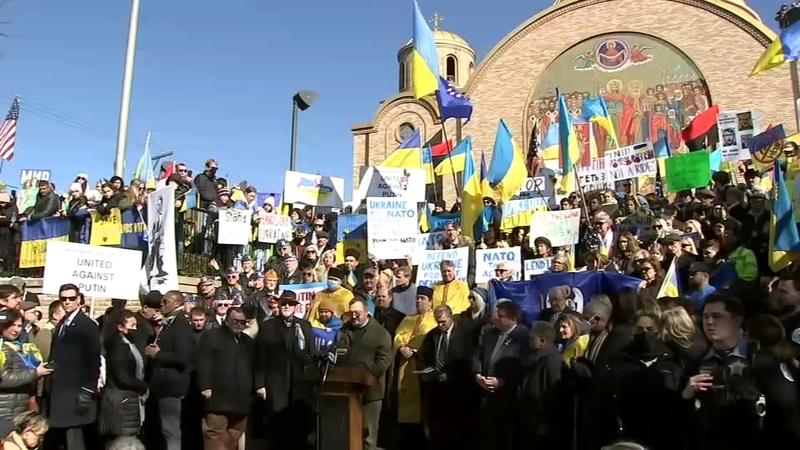 Gov. JB Pritzker and Chicago Mayor Lori Lightfoot were among those gathered Sunday. They stood alongside Ukrainian Americans, calling for an end to Russia's invasion.

"Slovo Craney and screw Vladimir Putin," Pritzker said. "Today, we stand for democracy and today we stand united for peace and freedom for Ukraine. To the heroes of Ukraine, Illinois is with you."

He joined congressmen and people from all across the city outside St. Volodymyr and Olha Ukrainian Catholic Church.

They called for urgent sanctions against Russia.

"I may be of Indian origin but today we are all Ukrainians," said Congressman Raja Krishnamoorthi.

Those with family overseas urged America to send arms and support to Ukraine.

"We still have a lot of family in Ukraine and this invasion of a sovereign stay in Europe a civilized nation is just horrendous. And Putin is our 21st-century Hitler. He's a madman and he must be stopped," said Anna Powers.

Demonstrators called for action over words.

"What we need is action. What we need is physical support and not just world leaders who can sit and watch mass destruction from the comfort and safety of their living room, tweet thoughts and prayers for Ukraine, and then change the channel," said a woman named Tanya.

"Hope and prayers are essential. But when you're dealing with Putin, hope prayers and a javelin missile are even better," said Congressman Mike Quigley.

Lightfoot recognized Ukraine as one of Chicago's oldest immigrant communities and as part of the fabric of Chicago. She called on the United States to open its borders to any fleeing Ukrainians.

Chicago Mayor Lori Lightfoot urged leaders to continue to provide weapons and humanitarian aid to Ukraine at a rally Sunday.

"It's Ukraine today, but it will be another democratic freedom loving country tomorrow. We must stop him in his tracks and it begins right here and now with Ukraine," Lightfoot said.

Ukrainians living in Chicago united on Saturday to show solidarity with their native country with a truck and a car caravan more than 100 vehicles long.

Supporters throughout Chicago, and especially in Ukrainian Village, are showing their support for Ukraine.

Organized in less than 24 hours using social media, the caravan of semi-trucks, most draped in the blue and yellow Ukrainian flags, started in suburban East Dundee and ended at Chicago's Buckingham Fountain downtown.
Anna Mariya Skakodub's parents and sibling still live in the western part of Ukraine.

"I still hope that every time I call them I will still get a message that they are still alive," she said. "They are still okay and my country is still safe."

Signs were also posted across Ukrainian Village. People are begging the U.S. and other foreign powers to do more to stop this war.

Earlier Sunday, Cardinal Blase Cupich joined St. Nicholas Ukrainian Catholic Cathedral for Divine Liturgy. They prayed for peace and an end to the war. All parishes, schools and worship sites in the archdiocese were asked to ring their bells in solidarity with the people of Ukraine at noon.

"It is our moment in the history of our world to say stop, no more. We want a different world for our children. That is what this moment is all about," Cupich said.