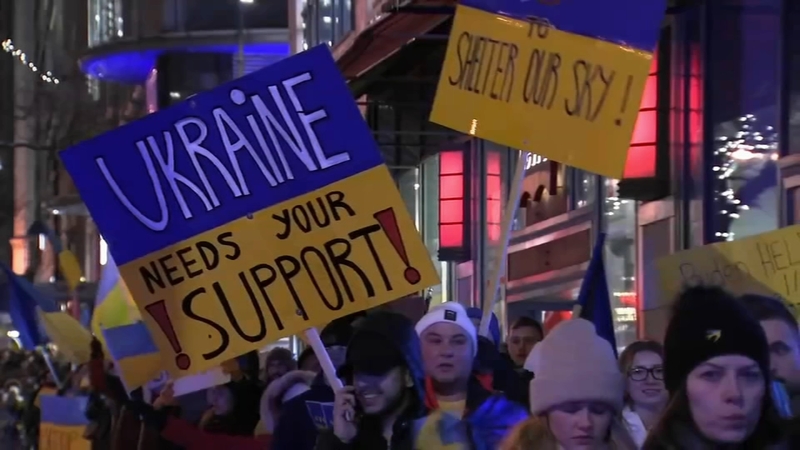 CHICAGO (WLS) -- Support has been pouring in worldwide for Ukraine, including in Chicago.

The Archdiocese of Chicago churches are holding special masses and rosaries on Feb. 26 and Feb. 27 to pray for peace and an end to the war.

Holy Name Cathedral is holding a service at 9:00 a.m. Saturday.

At least three different churches across the Chicagoland area are holding mass Saturday to pray for peace in Ukraine. At a Catholic Church in Willow Spring Friday night, there was a special mass.

A large group of supporters joined Ukrainians living in Chicago at a Millennium Park rally Friday night, pleading with President Biden and the United States for help.

What began as a group of a few dozen people quickly swelled to over 1,000 as demonstrators marched down Michigan Avenue.

Thousands in the Chicago area have ties to Ukraine. It's estimated around 200,000 Ukrainian Americans live in Illinois, with more than 50,000 of them living in Chicago. Many have family and friends who are under attack in the Ukraine right now.

Many of the Chicago employees in Sobko's import/export company are Ukrainian. And about 50 of his employees and their families are in the Ukraine right now. They have taken cover in bomb shelters that have been around since World War II. Sobko's 60-year-old father joined the Ukrainian army.

"My Dad said there's huge lines," Sobko said. "He said people are signing up... to defend their freedom."

Ukrainians in Chicago and the suburbs have been gathering together to pray and lend support since the start of Russia's invasion.

A large group of Ukraine supporters in Chicago rallied at Millennium Park Friday night, pleading with President Biden and the United States for help.

"It's heartwarming," demonstrator Stephan Marchuk said. "Chicago has a big Ukrainian population. This is the best we can do."

Car caravans have been spotted all over with city, honking horns and flying Ukrainian flags. Meanwhile, Vladyslav Levinskyi is holding his breath, trying to communicate with his family.

"They hear all the sounds of war and the bombs and all that," he said. "They're sitting in the basement."

His 83-year-old father and older brother decided to stay in Kyiv while Levinskyi's 15 year-old son runs for the western border with other relatives.

"They're still in Ukraine. They're moving there because the roads are overcrowded. It's backed up. And it's making things much more difficult," Levinskyi said.

Maria Dziuma grew up in Ukraine when it was under Soviet control, and most of her family remains there.

"They just went to the basement. They try to put in the basement water and supplies. And they say, this is our land. We are not going to go," she said.

Maria Klimchak shared pictures of her family friends in Kyiv, who got married in a church Thursday and Friday took up arms to fight the Russians.

"They are in army. Volunteer army. I can't even imagine, it's their honeymoon for the young couple," Klimchak said.

Children at St. Nicholas Cathedral School turned to their faith.

"I have faith in God that God will lead our country to peace. We will be a free country again," said student Uriana Rybak.

Many Ukrainian families endured another sleepless night saying sanctions against Russia are not enough.

"A lot of Ukrainians will fight, and they will kill the most wonderful, beautiful people, patriots," Dziuma said.

At a press conference at the Ukrainian Cultural Center, Senator Dick Durbin agreed that current sanctions are not enough, but said more are on their way.

"They are not enough. They are not enough at the moment, but there are more sanctions anticipated. I don't know all of them," Durbin said. "I would impose stiffer sanctions, the sooner the better, to the point where clearly it is affecting the Russian people and their leaders directly."

Deana Lozak teaches religion at St. Nicholas Cathedral School. Her message to the children there is to spread love in this time of uncertainty.

"It's a difficult time and I think the road ahead is not going to be easy either, but with our faith and our pride, it'll be OK," Kozak said.

ABC7 spoke with one woman in Ukraine who is scrambling to keep herself and her family safe.

Kira Palatchenko was on vacation in Rio, Brazil and arrived in Kyiv on February 21. She spoke to ABC7 via Zoom and said she heard loud noises outside.

Kira suspects they are bombs being dropped by Russian jets.

Kira's friend Maryana lives in Chicago and was also on vacation in Rio. Maryana said she has relatives and friends currently in Ukraine.

She said her family has moved from the city to a nearby village. They feel they will be safer there.