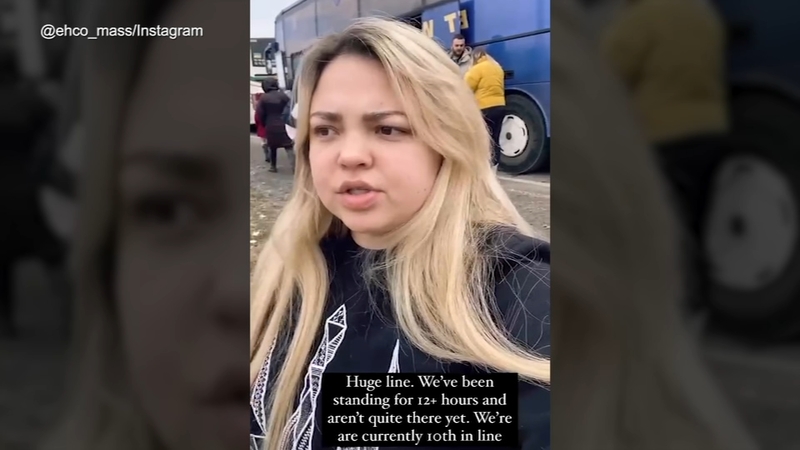 CHICAGO (WLS) -- As Chicagoans gathered food and supplies to send to Ukraine, one local woman has found herself stranded there in the midst of war.

Olga Tsoi and her mother scrambled for cover in a bomb shelter near their family's home in Kyiv as Russian missiles rained down over the capital city.

Trapped during an extended family visit and recovering from unexpected knee surgery, the Ukrainian-born social media blogger found herself trapped in a war with dwindling hope for escape.

"We just started trying to figure out how we can get and go as far west as we can, because that's where we knew it was safer," she said. "Everything got sold out. The buses, everything."

Some Ukrainian Americans in Chicago gathered at Tryzub restaurant in Ukrainian Village to watch President Biden's State of the Union address and wait for word from home.

Tsoi and her mother managed to snag the last few seats on a westbound bus, in what turned out to be a days-long pilgrimage to the Polish border.

They were the lucky ones, with a warm bus to shelter them from the elements.

"People were standing outside, people were waiting in the cold in line. It's mostly women and children at the border, because men aren't allowed to leave," she said. "It was heartbreaking to see people just getting anything they can get their hands on."

Watch: Couple who married on 1st day of invasion on why they stayed to fight

Yaryna Arieva and Sviatoslav Fursin married on the first day of the Russian invasion, and then immediately took up arms to fight for Ukraine. They explained why.

Tsoi and her mother are now safely in a hotel in Krakow, but they no longer recognize their life.

"I don't think I can say that I'm OK because the meaning of OK has changed for me," Tsoi sid.

Her family is left in the besieged southern part of Ukraine, and she refuses to return to Chicago without her mother.

"I'm extremely worried and anxious because I know I'm safe, but the country isn't, and the people that I love aren't. You can't go to sleep knowing what's happening," she said.

Volunteers in Dunning packed box after box of donated goods to send to war torn Ukraine.

In Chicago, people are doing whatever they can to help, including dropping off boxes upon boxes of supplies to be sent overseas.

Dozens of volunteers work the corner outside Meest Karpaty international shipping company in Dunning. There was a call put out for medical supplies and combat gear for Ukrainian forces and civilians battling Russian invaders, but so much more has come pouring in.

"Out of everything that is terrible, something beautiful always comes out and the unity of people, especially Americans, we're so grateful because you guys know what democracy is, so you understand that we want one," said Mila Ugryn, donation drive volunteer.

36th Ward Alderman Gilbert Villegas stopped by, saying residents have been calling his office and asking what they can do to help.

"When I was in Desert Shield, Desert Storm, I remember waiting for those care packages and simple things that people take for granted like wipes and soap are crucial during this time," he said.

Meest Karpaty will ship the items at no charge Wednesday on a flight to Poland, where volunteers will take the items into Ukraine. What doesn't go out Wednesday will go on another flight Saturday.

Svaitlana Demyanyk said what's happening in her homeland is devastating, but she remains hopeful.