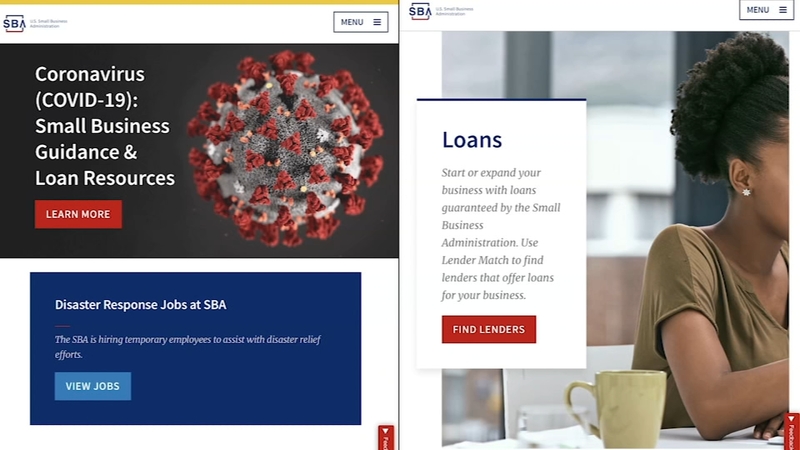 CHICAGO (WLS) -- A Chicago area woman who recently lost her job said someone applied for a small business loan in her name.

The woman said she doesn't own a business and wants to clear her identity.

"It's heartbreaking because I don't know what else they're doing," Sophia said. "That's the part that's scary."

She said she got an alert from Experian about a credit inquiry from a small business loan provider.

Sophia said she called the credit agency and learned that someone had indeed applied for a small business loan in her name.

"I don't have a small business," she said. "I did not apply for any type of loan...I have no idea what this is. I'm just really worried about this."

She said the loan is through the U.S. Small Business Administration , also known as the SBA, and it appears she's not the only one who is trying to clear their name.

One viewer wrote the I-Team saying, "It turns out someone using my personal information applied for a $110,000 business loan for a fictitious company."

Another person called the I-Team saying, "I just found out someone applied for a small business loan in my name worth $10,000. I don't know what to do.

Sophia said she doesn't know how much the loan in her name is worth because she can't reach anyone with SBA.

"I have other stuff to worry about: roof over my head and food....unemployed, all of that," she said. "I don't have time to worry about this."

The SBA said they do not comment on individual borrowers, but said, "Evidence of waste, fraud, and abuse with any of SBA's loan programs is not tolerated and it is encouraged that suspicions of fraud, waste, abuse, or mismanagement of federal funds involving the agency's programs, operations, or personnel be reported to SBA's Office of Inspector General's Hotline."

Sophia said she'll continue to keep calling the SBA and as she waits for a response, she hopes her identity doesn't take another hit.

"I'm very worried that now that it's been stolen, what else is coming down?" she said.

The FBI said these types of scams are on the rise because of the pandemic as scammers work overtime to exploit people's personal information. If you believe that your identity has been stolen, you should follow these three steps: