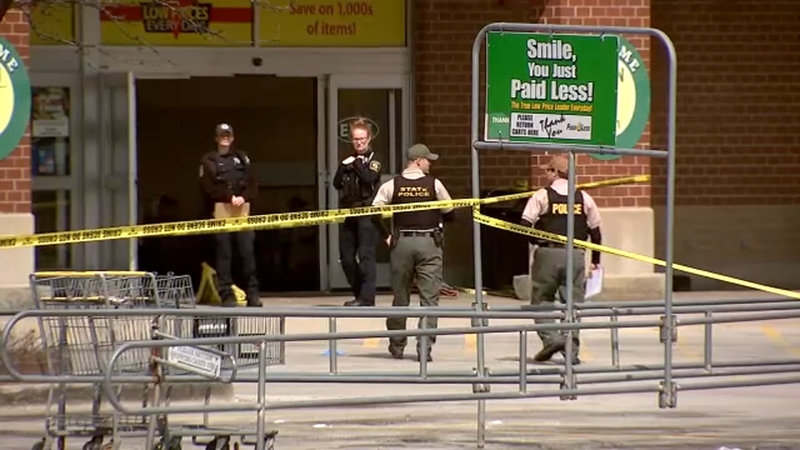 OAK FOREST, Ill. (WLS) -- A Calumet City woman is dead and an officer is injured after a police-involved shooting in Oak Forest Sunday, according to officials.

There were some very scary moments for shoppers at the Food4Less, where the incident escalated.

Just before 11 a.m., Oak Forest police responded to the 6000 block of 159th Street for a possible motorist needing assistance. When they arrived, officers determined the driver was armed with a firearm, according to police.

"A car pulled out of the Subway parking lot and t-boned her, and the lady got out of the car with her gun drawn," said witness Josh Graham. "The lady with the gun came out of the car lot right next to our vehicle and she basically looked right into my face. And I just went, no, not today -- I don't want to be carjacked or anything like that -- and the cops were right there with their tasers drawn."

That driver was identified as 21-year-old Ketura Wilson of Calumet City, Illinois.

Police were attempting to transport Wilson to a hospital for a mental health evaluation when she managed to escape, ending up in the parking lot of this Food4Less three-quarters of a mile away, Illinois State Police said.

Officers followed her and attempted to negotiate, ISP added.

"I was just doing my job pushing the carts and then about three squad cars pulled up and then, essentially put, they tried to taze her first because they apparently knew who she was," said witness Bryce Hartsfield.

Witnesses said the shooting started outside, then moved into the store, sending shoppers fleeing towards a back room.

"When they tased her, she pulled out her gun and then when she fired off shots, many rounds were pulled and they chased her into the grocery store and she was shooting them," Hartsfield described. "She ran into the store trying to get away from them, and she was firing off shots in there and they were firing off shots at her in there."

"The yelling escalated even more. And then I just heard gunfire. I knew it was gunfire," said Jackie Human, who also witnessed the incident.

A typical Sunday grocery run turned into an unforgettable one.

"I was kind of dumbfounded that I'm in Food4Less, why am I hearing gunshots? And where are they coming from," Human said. "As I walked out with the officers, there was what I believed was an officer wounded on the ground in the produce area. He did look alive. He just look wounded."

"I Have a five year old son in the car. My wife is in the car. I was pretty terrified. My initial thought was to get my family out of there," Graham added.

Wilson and an Oak Forest police officer were both injured in the shootout and were both transported to area hospitals.

POLICE UPDATE ON ACTIVE SHOOTER: The suspect is in custody. There is no longer a threat to the public; however, police still advise to avoid the area. There will continue to be a heavy police presence in the area.

The officer is in serious but stable condition, but Wilson has died from her injures, officials said.

"You can't even go, do something as routine as your Sunday grocery shopping without having to worry whether you're going to go home," Human said.

The incident is being investigated by the Illinois Public Integrity Task Force, as well as the Oak Forest Police Department.