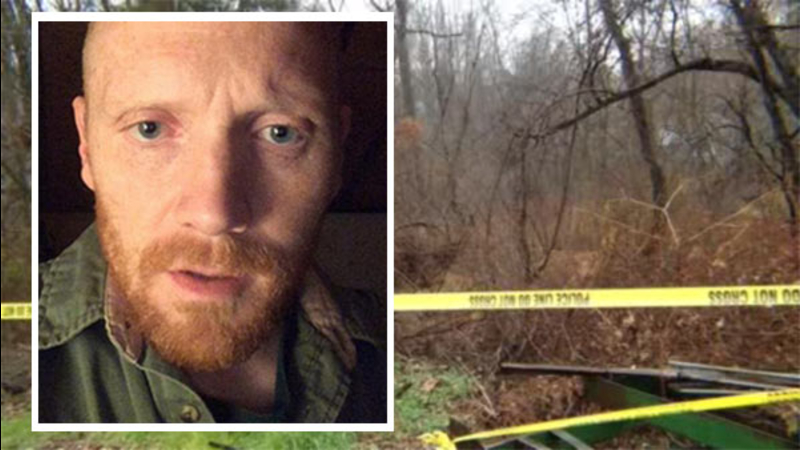 PENNSBURG, Pa. -- Bradley Stone, the suspect behind a murder spree in Montgomery County that left six people dead and one person wounded has been found dead, the district attorney's office has confirmed.

Sources say Stone killed himself with a sword in his stomach, and that sword was used in the murders.

Action News earlier learned that his body was found dressed in sand-colored camouflage. That clothing had Bradley Stone's name on it.

The body was found along a stream bed in a wooded area about 200 yards from Stone's home in Pennsburg, Pa. on Tuesday afternoon.

Stone lived on the unit block of 4th Street, and his street comes to a dead end at the wooded area. 4th Street picks up on the other side of the stream and that's the block where the body was found.

Police felt he must not have gone far, because they found his car and cell phone near his home.

This brings an end to a massive manhunt that spanned nearly two days.

The manhunt for Stone, a former Marine, began Monday morning after authorities began following a trail of death that eventually led them to six bodies and a critically wounded teenager in three different locations in Montgomery County.

All six victims have a familial relationship with Stone.

Among the victims was 33-year-old Nicole Hill, Stone's ex-wife. She was shot inside the Pheasant Run Apartments in the 100 block of Main Street in Lower Salford Twp.

A neighbor there, who did not want to be identified, told Action News, "I heard 3 or 4 gunshots. I heard the kids yelling, saying 'Mommy no! mommy no!'" He kept saying, 'We gotta go, we gotta go."

The neighbor continued, "I asked him if everything was okay, and I saw the kids and the kids' father exiting the house, and they didn't have any coats on or anything. They just had their pajamas on."

"He was like, 'She's hurt pretty bad. We gotta leave,'" the neighbor continued.

Stone then took their two daughters from the home, Montgomery County District Attorney Risa Vetri Ferman said, and dropped them off at a neighbor's house in Pennsburg shortly after 5:00 a.m.

Action News has learned Nicole Hill got engaged over the summer. Her fiance is with police because they are concerned for his safety.

Several hours later, Hill's sister, Patricia Flick, along with her husband, Aaron Flick, and their 14-year-old daughter, Nina Flick, were found dead inside a home in Souderton. Their 17-year-old son, Anthony Flick, was found wounded and was rushed to the hospital.

Ferman said on Tuesday that Anthony Flick was in "very serious condition."

Investigators believe the victims in Souderton were Stone's first alleged victims, who were shot around 3:30 a.m.

By the time the scene in Souderton was discovered, police in Lansdale had already found the bodies of Nicole Hill Stone's 57-year-old mother, Joanne Hill, and her 75-year-old grandmother, Patricia Hill.

People who live nearby say they often saw Stone confronting his ex-wife outside.

Among the first on the scene after the bodies were found was Joyce Gorman, who said she's a close friend of the grandmother who was murdered.

Gorman said she knew in her gut what happened as soon as the news broke on TV.

"I was concerned because I couldn't get a hold of her and she hasn't called me back. We usually speak every couple of days, I just spoke with her yesterday," Gorman said.

There was a false alarm in Doylestown late Monday night after a reported carjacking attempt. The suspect description matched that of Stone, but police called off that search by Tuesday morning.

There were at least two victims in Lansdale. Walter Perez has been talking with neighbors there.

Neighbors say there has been an ongoing custody dispute between Stone and his ex-wife. Neighbors also said Stone had issues stemming from his time in the military.

According to a Marine spokesperson, Stone is a former Marine reservist who served from 2002 to 2011, with one deployment to Iraq, leaving with the rank of sergeant. He was deployed to Iraq from April, 2008 until July, 2008.

Stone and Hill married in 2004 and filed for divorce in 2009, the Associated Press reports, citing court records.

He had faced several driving-under-the-influence charges, one of which was handled in veterans' court and led to a three- to 23-month sentence, the AP reports.