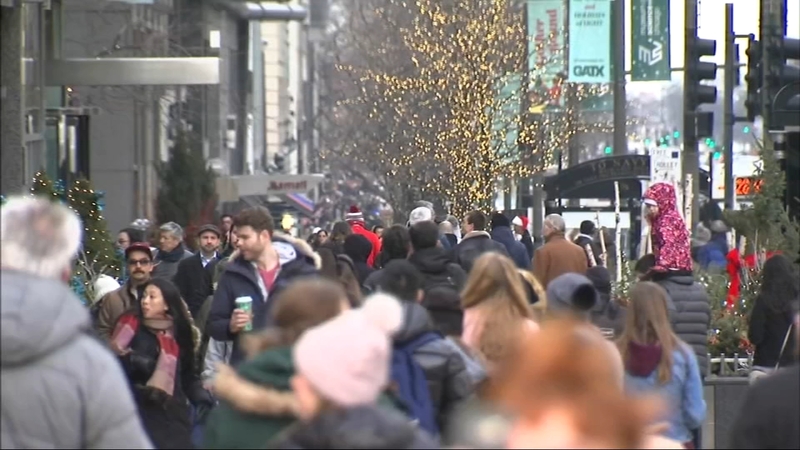 CHICAGO (WLS) -- The day after Christmas is a very good day to go shopping, since many retailers offered deep discounts. For some, these are their lowest prices of the year.

Holiday shopping is over. Sort of. Now it's time to hit the stores to return all that stuff you don't want or need.

"We basically live in a toy store in our condo in the city. Just trying to make some room. Returning for some gift cards," said shopper Steve Samlan.

According to the National Retail Federation, about 17 percent of people will return something they got for the holiday. While they're at it, they'll probably be taking advantage of deep discounts retailers are offering now that Christmas is over.

"Oh my goodness. If you have a chance to go to Old Navy, 75 percent off. The entire store and 50 percent off the jeans," said shopper Nicole Swanson.

Along the Magnificent Mile and at Water Tower Place, some stores slashed prices up to 80 percent. Retailers use the price cuts to attract shoppers who are in the store to return gifts that just didn't work out so well.

Stores all over the city, including Target, Macy's, Kohl's, Best Buy and Nordstrom, are looking to clear their shelves of unsold merchandise.

"We saw good ones here in Macy's and we are going to Tommy Bahama. They have a 50 percent off coupon," said Joe Neussendorfer, a shopper.

Neussendorfer said he travels from Michigan to Chicago every Christmas - and loves to snag the discounts.

"It is a tradition to come in every Christmas and people don't realize it is a real bargain," Neussendorfer said.

The sales also convinced the Kavathas sisters to get out of bed early to hit the mall.

"I'm a college student, so sales will be great," Lauren Kavathas said.

Last year, more than half of the after-Christmas sales were for clothes and accessories. Retailers also offered great prices on electronics, video games, holiday decorations and workout equipment.

"We are here for ourselves now. We are done shopping for other people," said Yolanda Paul, laughing.

While it's too soon to fully capture holiday retail sales through the end of the year, everything indicates a season that was indeed merry and bright. Analysts are reporting the strongest growth in the last six years with $850 billion dollars spent. Online sales are reporting an increase of 19 percent over last year. Amazon Thursday confirming record-breaking sales by people taking advantage of the company's free shipping offers. Brick and mortar also doing well. Downtown Chicago, State Street and Michigan Avenue are seeing lots of foot traffic-- a trend that is expected to continue through the end of the year

"Everything went the way the projections were going. An extra week of holiday shopping to start things off. Lower gas prices which put more money in people's pockets and a stronger employment record that just had more people spending," said John Chikow with the Magnificent Mile Association.