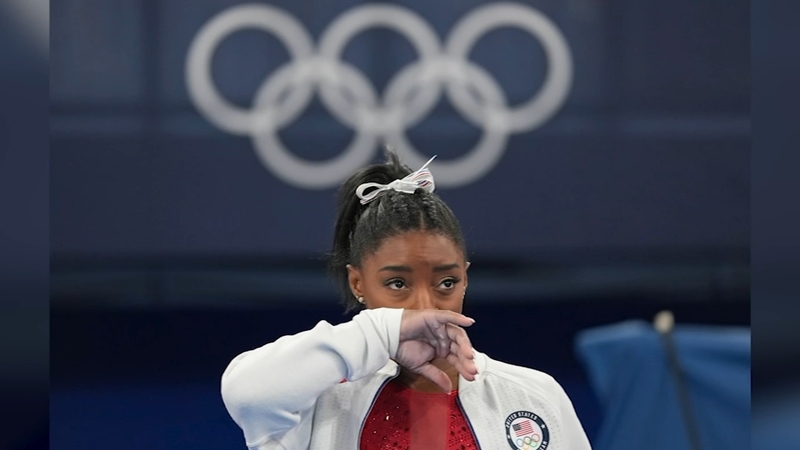 CHICAGO (WLS) -- While the gymnasts at Team Yurchenko in the South Loop gave their full focus to bars and beams at Tuesday practice, off the mat the elite hopefuls are talking about Simone Biles.

"It's hard to see her not competing because the last Olympics, she did so well," said Gigi LeBron, gymnast.

"She's been competing for so long and everything she does is really inspiration," said gymnast Jenna Coffman. "I know that she's doing what's best for her, and I think that's really important."

Biles withdrew from the team competition after her opening vault, saying it was for her mental health.

"Today has been really stressful," Biles said at a post-meet press conference. "We had a workout this morning. It went OK and then that five and a half hours wait, I was just shaking. I could barely nap."

The 24-year-old Olympian, widely considered the greatest gymnast of all time, wanted to do what was best for Team USA.

"It's OK sometimes to even sit out the big competitions, to focus on yourself because it shows how strong of a competitor and person you really are," she said.

Biles bailed on a two and a half twisting Amanar, completing only one and a half rotations and landing poorly. It was widely anticipated that she would perform a Yurchenko double pike vault, which has never been landed in international competition by a woman gymnast. If she performs it in either of the individual competitions and lands it, it would become the second vault skill named after Biles.

The Yurchenko, which is a round-off onto the springboard followed by a back handspring onto the vault, and is named for the co-owner of C.I.T.Y. Club Gymnastics Academy in the South Loop and former all-around champion Natalia Yurchenko.

"It's a very technical sport, so your mind is just as important as your body," Yurchenko said. "So if your mind is off, you cannot do anything even if your body is strong."