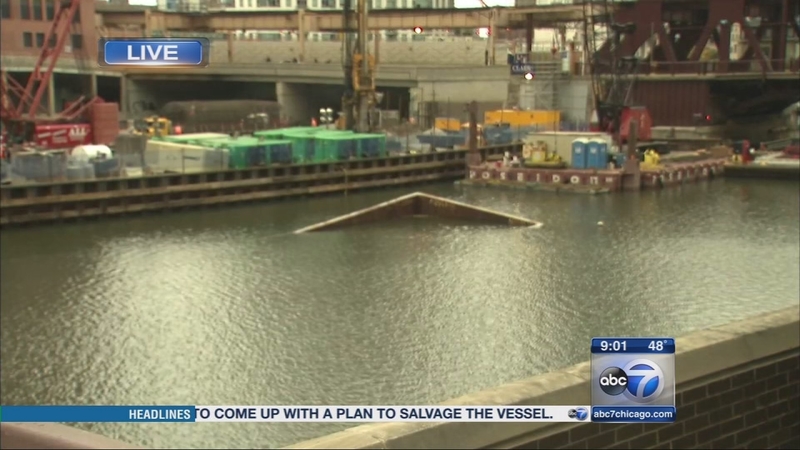 CHICAGO (WLS) -- A construction barge broke free from its mooring and sank on the Chicago River in the West Loop on Friday.

The barge remains submerged in the river between Randolph and Lake Street. Crews opened the area to river traffic overnight Friday but closed it again Saturday morning so that owners could execute a salvage plan on the barge.

Video was taken by the captain of a Chicago water taxi boat passing by moments after the center of the barge apparently split. It then began to sink in the middle, eventually each end sticking up out of the water.

It is a startling sight. Many of those walking by overhead on the Randolph Street Bridge stop and take pictures.

"I walk by here every day and this is really shocking to see. It's surprising," Molly Delaney said.

Friday night crews inspected the barge, apparently trying to figure out how to pull it out of the river.

It's the second time a barge has sunk on the Chicago River in recent months. In July a barge being used in the Chicago riverwalk project sank near LaSalle Street. Crews had to tow that out, but they might have a more difficult job with this latest sunken vessel.

"It's going to take a lot of work to clean it up and I'm just glad nobody got hurt," David Hrabal said.

A lot of recreational boaters will be using the river Saturday as they stow their boats for the winter at the Chicago harbors. The Coast Guard hopes the barge will be out of the way in time for those boaters to use the river.