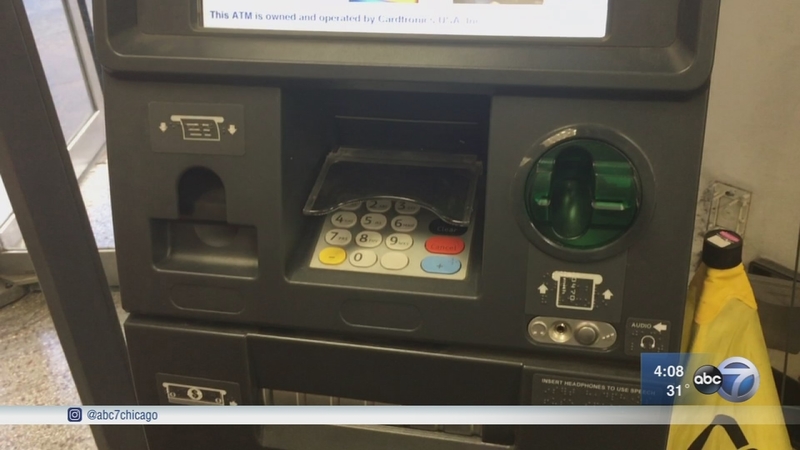 CHICAGO (WLS) -- A skimming device was found Tuesday night on an ATM in the Loop.

Shortly before 11 p.m., a customer at a store alerted the manager that a skimming device was attached to the ATM in the 200-block of North Michigan Avenue, according to Chicago police.

The manager called police and a technician from the ATM company, who then located the skimming device and a camera above the key pad, police said.

"It's scary knowing that people are out there, especially this time of year, that want to scam you. It's sad," said Molly Egan, shopper.

Skimming devices are attached to ATMs and steal data encoded onto the magnetic strips of bank cards. Pinhole cameras capture PIN numbers as they are entered by the ATM user.

Just two months ago Chicago police put out a community alert after 13 credit card skimmers were found, mostly on the city's North Side.

Bernas said that is getting harder to do as skimmer technology gets smaller and even harder to spot.

"I always think, you know, make sure I'm looking around, make sure nobody sees my personal information, knowing my PIN number and knowing that information can still be stolen. Wow, that's interesting," said Patrick Bell, shopper.

There are two things you should do to protect yourself at the ATM: Make sure the area where you put your card in is solid, with nothing coming out, and cover your fingers when you put in your PIN number. Thieves can't get your cash if they don't have that code.

"Yeah, this time of year that's the last thing you want on your mind, on top of everything else," Egan said.

No one was in custody early Wednesday as Area Central detectives investigated.