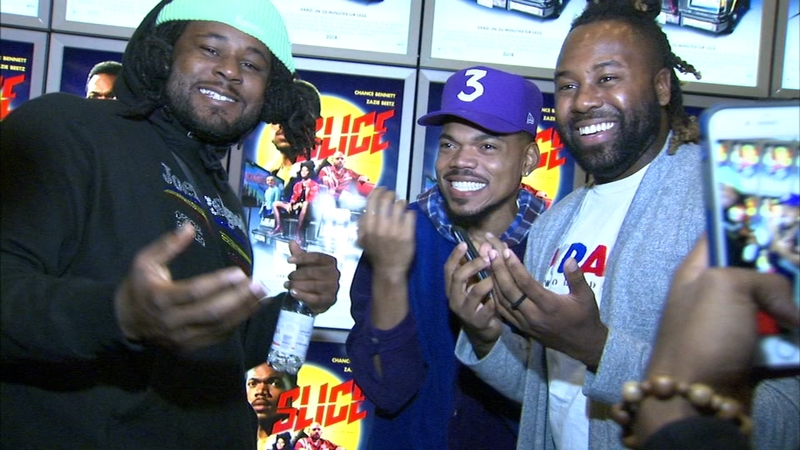 CHICAGO (WLS) -- Chicago's Chance the Rapper is ready for his close-up as Chance the Movie Star.

The musician stars in his first movie, "Slice," which had its local debut Monday night on the North Side.

Chance was the newbie on set.

"It was awesome, it was very cool, awesome crew," he said.

Slice is about a spooky small town where pizza delivery people keep getting knocked off; two survivors are out to catch the killers. Chance, 25, stars as one of those survivors, but his character is also supernatural. The movie was shot in Joliet.

"Every morning I drove out to Joliet around 5 a.m. and I didn't really get any sleep the night before, and that was usually my ritual. Stay tired," Chance said.

Austin Vesely wrote and directed the film; he's also a frequent collaborator with Chance on his music videos.

"To me, honestly it felt the same it's just been, the same sort of collaboration between us for so long," Vesely said.

Another Chicago native in the film is Rae Gray, who's in TV's "Fear the Walking Dead."

"Most of the actors stayed in Joliet while filming, I was staying in Chicago with my parents, so I had the nice commute on the Metra," Gray said.

Chance the Rapper used his real name, Chance Bennett, for the film.

Monday night's premiere was a one-time only release in theatres; 20 of them around the country. "Slice" is now streaming on all platforms.