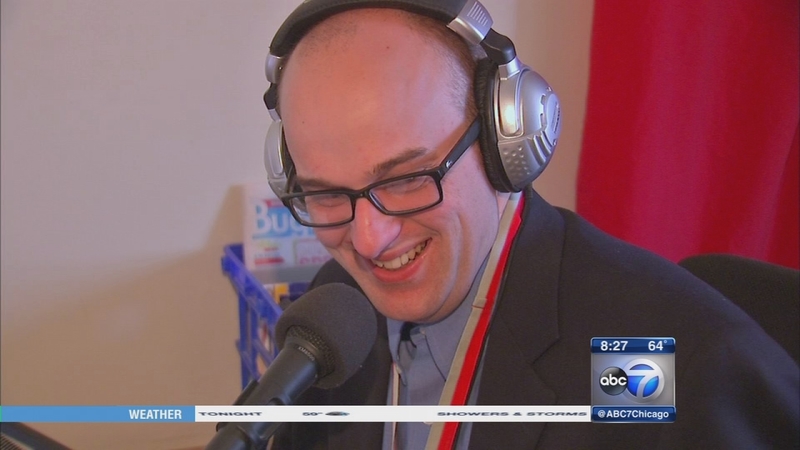 LA GRANGE PARK, Ill. (WLS) -- Getting behind a microphone for a live broadcast can sometimes be a real challenge; but imagine hosting a show with a speech impediment.

One local man is doing it, and doing it very well. Not only that, he's also quite a writer and an athlete as well. But above all, he's an inspiration.

And with that Daniel Smrokowski is on the air with his podcast program. He produces his show, "Special Chronicles," from his home studio in La Grange Park.

"My mission is giving respect and a voice to people with special needs," Smrokowski said.

And this journalism graduate from Roosevelt University certainly knows his audience. All his life he's has battled developmental disabilities.

"I was born three and a third months premature and I weighed less than a pound when I was born," he said.

Athough he faced both physical and intellectual challenges, Smrokowski has never slowed down. Besides getting his degree and starting his own website, he is also an accomplished swimmer, competing in Special Olympics meets all over the country. In the process, he's become a champion for the disability community.

"Both my mom and my dad never gave up on me as well as a lot of my special education teachers, my family in Special Olympics," Smrokowski said.

That's the message he now brings to his listeners in some 85 different countries while interviewing guests as a global ambassador for the Special Olympics.

"It doesn't matter if we win or lose. It just matters that we have fun; like the athletes' oath, 'Let me win but if I don't, then let me be brave in the attempt,'" he said.

But by any definition of the word, this young journalist can truly be called a winner.

"Communication is my biggest struggle, but it also my biggest passion," he said.

Next up for Smrokowski is the Illinois Special Olympics summer games, which take place in June. He's once again competing in the swimming and basketball events, and no doubt, he will also be collecting material for future shows.