WABC
By Lucy Yang
BOERUM HILL, Brooklyn -- Police are investigating after shocking video shows an excruciating tug of war between a group of officers and a mother trying to hold on to her baby. It all apparently started, because there was nowhere for the young mother to sit.

The mother is facing a slew of charges, but Brooklyn Borough President Eric Adams will be calling for those charges to be dropped when he comes to the center later Monday morning.

The NYPD is calling the video 'troubling,' and the mother's outraged family is demanding justice.

It was pandemonium inside the Human Resources administration building on Bergen Street in Boerum Hill, Brooklyn.

Police and HRA security officers tried to take a 1-year-old boy from Jazmine Headley, 23, so they could arrest her.

"I was devastated to see something like that happen to my daughter and grandson. And how this officer yanking on my grandson to get him out of my daughter's arms," said Headley's mother, Jacqueline Jenkins.

Jenkins is livid. She says Headley is now in jail, and is barred from seeing her own son, Damone.

According to Jenkins, Headley had gone to the HRA building on Friday morning to ask for day care vouchers for her baby, so she could work as a cleaner.

Police are investigating a video that shows a mother getting arrested at a Brooklyn benefits center while holding her baby. (WARNING: Strong language)

Eyewitness News was told the city agency was slow and crowded, so there were no chairs available. Headley sat on the floor with her son to wait for her turn.

Nyasia Ferguson took the video and confirms that both Headley and her son were not blocking any doors or passageways.

When security guards ordered Headley to stand, Eyewitness News is told the mother refused, because there were no seats, and she had her baby. A supervisor was called - and then police.

"She called five other security guards. All harassing her, bothering her. Everyone...was like 'leave the girl alone, she's not bothering anyone, just sitting there like all day,' they kept harassing her," Feguson said.

Headley will remain behind bars until her court hearing on Thursday. She was unable to work or get the voucher, which triggered the incident.

Advocates argue her crime was not resisting arrest or trespassing or harming her own child, but seeking help from an agency, which then had her arrested.

"I was just so disgusted and scared. I thought the cops supposed to help you - they just straight up came and attacked the lady," Ferguson added.

Many have expressed outrage after seeing the video but so far, there is no response from the Mayor's office. 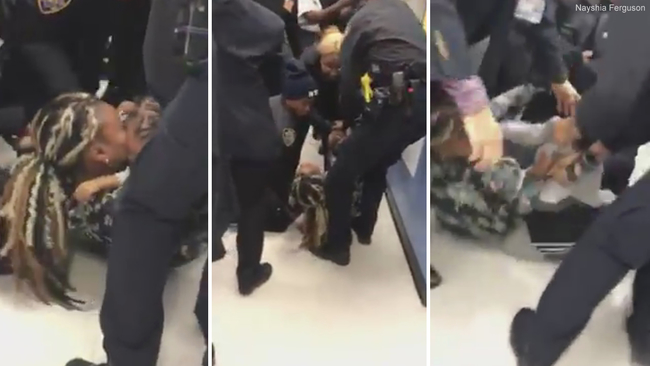 1-year-old pulled from mom's arms during arrest in NY 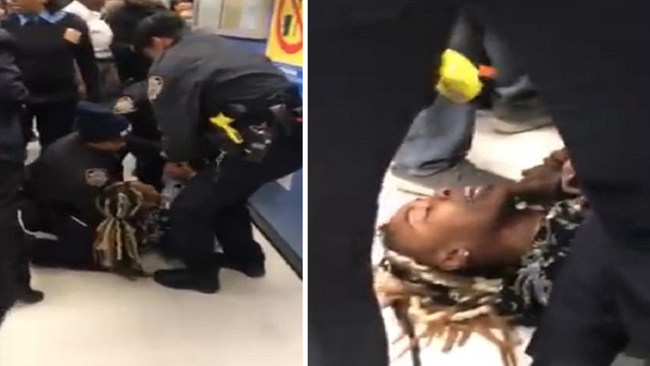